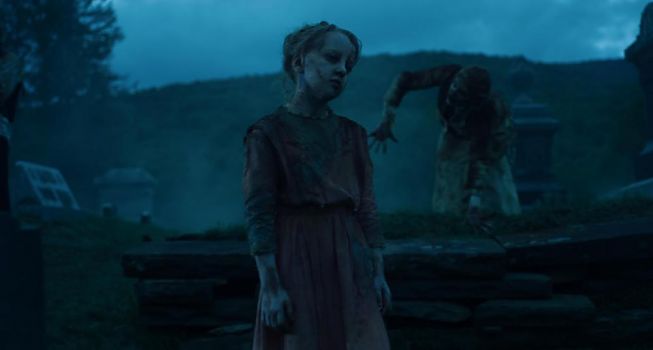 Even though the name of the US president isn‘t mentioned, demagogue Trump, his followers, and the insidious decay of values and moral inevitably come to mind in Jarmusch‘s meta zombie film.

“That‘s the theme song“ says Adam Driver to Billy Murray, when Sturgill Simpson‘s song “The Dead Don‘t Die“ plays on the car radio for the first, but not last, time. Does he really mean the film‘s theme song, which has been running for a few minutes? Jim Jarmusch doesn‘t make things that easy for himself or his viewers, but it quickly becomes clear that the New Yorker‘s 13th film isn‘t just a zombie film, it‘s also a meta zombie film. The plot doesn‘t unfold quickly, because it‘s exactly what you would expect from a zombie film, and Jarmusch cares even less about a conventional narrative than usual.

Strange things suddenly happen in the small town of Centerville. Clocks stand still, cell phones stop working, the sunrise and sunset switch, and worst of all, the dead are coming to life. For the residents who know a thing or two about zombie films like policeman Ronnie (Driver) or the gas station attendant Bobby (Caleb Landry Jones) it quickly becomes clear that this is a veritable zombie apocalypse, meaning the end of the world. The only thing to do against the undead is to sever their head. Ronnie does so with an elegant swing, just like samurai sword wielding Scottisch mortician Zelda Winston (Tilda Swinton) who seems like a relative of Ghost Dog. Many regulars from Jarmusch‘s oeuvre appear here, from Bill Murray to Tom Waits to Iggy Pop – who plays a zombie of course, and didn‘t requite a lot of make up for it.

It‘s not just the casting that indicates that Jarmusch is playing with the perception that viewers have developed about the actors and musicians. Tilda Swinton as Zelda Winston seems like the alien she‘s often described as with her extreme Scottish accent, her accentuated white hair, and especially her strange behavior. The short appearance of RZA blends reality, fiction, and cliche ideas so much that the public figure is cast as a postman for a company called WU-PS.

All of these nice distortions of reality help Jarmusch create aworld that is characterised by superficiality and apathy. Even a disaster like a zombie apocalypse, that turns more and more residents into the undead, registers as barely a blip on the radar, They take their destiny as it comes as long as someone says: everything will be fine! It‘s easy to see what Jarmusch was thinking about. The US under Donald Trump. Even though the president‘s name isn‘t uttered, you can‘t help but think about the demagogue and his followers, about the deterioration of values and morality. Using dystopian zombie films as metaphors for grievances was original when George Romero did it in NIGHT OF THE LIVING DEAD, by now it‘s an old cliche. Jarmusch is aware of this of course and doesn‘t even try to be subtle, but rather markedly broad. Jarmusch has rarely shot more crude moments, but the coarseness of the humor makes THE DEAD DON‘T DIE into a perfect film of this moment: it might not be the best time for refined humor when the world order is collapsing.