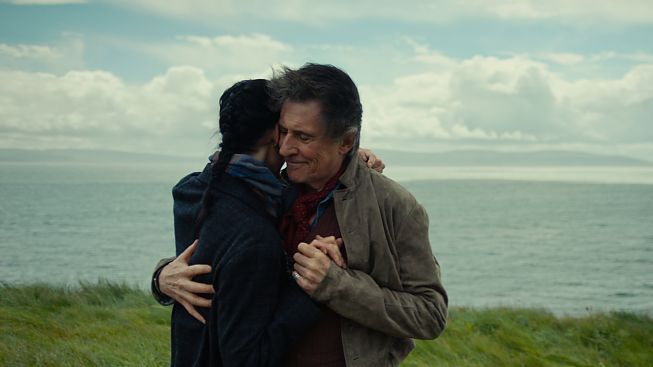 Death of a Ladies' Man

Sam (Gabriel Byrne) is an alcoholic and a university professor and an old charmer, even if that doesn‘t totally work anymore. Recently, he‘s been having strange hallucinations and is haunted by memories of his father.

“Death of a Ladies‘ Man“ from 1977 isn‘t one of Leonard Cohen‘s most successful albums. Phil Spector‘s production overlays the songs with the teenybopper cheese of the 50s, which only sarcastically works in the nostalgic sex pop song “Memories“ and the cynical “Don‘t Go Home with You Hard On.“ “Memories“ plays at the beginning of the film DEATH OF A LADIES‘ MAN, in which Gabriel Byrne plays Leonard Cohen surrogate Sam O‘Shea who dies in the way the Canadian author and director Matt Bissonnette dreams of.

Sam is an alcoholic and a university professor who finds out in the first scene that he‘s dying. While his son tells him that he‘s gay, Sam gives the waitress a flirty look and she responds by giving him the middle finger. Everything else is going badly for Sam too. His younger wife is having sex with a younger man and he is having very literary hallucinations. His students suddenly have party hats on and one recites Cohen‘s poem “The Music Crept By Us,“ his son‘s ice hockey team is performing ballet, a waitress has the head of a tiger. A doctor diagnoses him with a typical form of cinema cancer: Sam doesn‘t have much time left, but there‘s still time for an (imaginary?) trip to Ireland, the (imaginary) rescue of his daughter from claws of heroin, and a general reconciliation with his son and ex wife. The ladies man definitely has to be domesticated, because, people, it can‘t go on like this, drinking gallons and always thinking about sex. The hallucination scenes are pretty, there are a lot of lesser known treasures from Cohen‘s extensive texts and music productions (and the unavoidable funeral hit). But the story is a bit too neat.