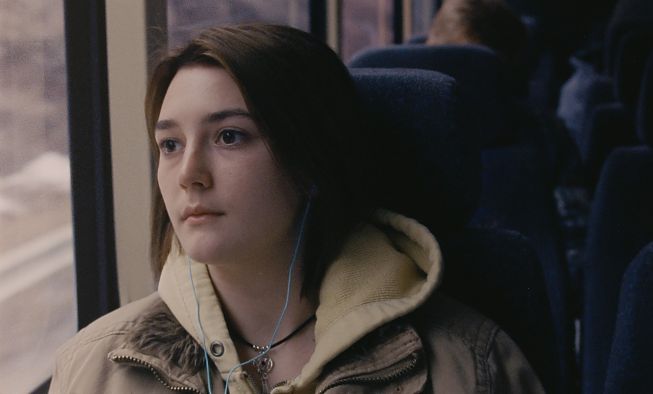 In your film you’re creating a very special, very beautiful atmosphere that frequently oscillates between a naturalistic approach and an almost dreamlike experience. How much of this was intended, and how much of it evolved during the process of filming?

It’s so interesting that you see it that way. Because when we were trying to get financing for the film and people asked me how I would describe it, I always said it was ‘a poetic odyssey’. So that was something that I was striving for in both the writing and the execution of the film. I think that while it was important to me that there is accuracy regarding the procedural aspects of the story, it was also important to me that the physical journey that Autumn goes through has a poetry to it. So, on the one hand, I was trying to balance the realness of those clinics and that experience, the harshness and the bureaucracy but, at the same time, I knew the physical stresses and strains needed to be infused with tenderness. It’s that mix of reality and beauty I was always trying to achieve all along, and I’m glad people see it that way.

Looking at Never Rarely Sometimes Always in line with your two previous films, there is one big theme running through them in that they all deal with young people and sexuality. Did you set out to make a vague trilogy in that sense?

This movie was something that I had begun working on even before Beach Rats, so it was sort of in my archives in a way. I started working on it after It Felt Like Love and I originally had a treatment for a story set in Ireland about an au pair who is foreign and working in the countryside, and she is forced to go to London and back in one day for an abortion. But at that point, I was making micro budget movies, and I didn’t have any agents or any representation, and I thought it would just be impossible to pull off. So, I started to explore options for shooting it in the United States instead, though keeping the basic structure, keeping the journey of a girl going from someplace rural to someplace urban. But then I put the movie aside and ended up doing Beach Rats instead. And I sort of thought I was going to move on from films about youth after that. But when Trump was elected, and I was asked about my next movie by everybody at Sundance, this story just kept coming back to mind. And it felt even more relevant than before to tell it. So, in a way, it’s intentional that the films are related, and in a way it’s accidental.

Let’s talk a little bit more about the climate in which you were trying to finance this film. How difficult is it to make a film about abortion in America these days? Do you think it would have been easier if you had continued with your original plan five years ago, before Donald Trump became president?

When I went out pitching the film in 2014 in the Obama era, there was like a delusional optimism and people didn’t see the urgency for a story like this to be honest. I kept saying: ‘Oh, but this does actually happen every day.’ And even though abortion is – quote, unquote – legal in the US, abortion laws and restrictions vary by state, and it is still a very difficult process. There are so many bans and there are so many ways each state tries to chip away at a woman’s right to choose what happens to her own body. But nobody saw the relevance back then. Only when Trump became president, the conversation, in cultural and political terms, became all about access. And I think people understood the project more in a Trumpian America. But it was still hard to finance. I think part of the problem is also that when you make small movies, people just want you to make small movies. However, the budget that we put on the project was higher than what I used for my previous films, so that was also an obstacle. But I had two very determined producers, Adele Romanski and Sara Murphy, who really fought for it, to keep the budget where it was.

We don’t really get to know Autumn through the film, because she has a very quiet, introverted character, which makes it quite hard to root for her. At the same time, you’re telling such an intimate story. How did you find Sidney Flanigan for the lead role? And how did you work with her to get to that very special performance that we see on screen?

I met Sidney in 2013 when she was 14 years old. I was working as a producer on a kind of performative documentary set in Western New York. We infiltrated a group of kids who were part of a subculture, and Sidney was hanging out with those kids. She was intriguing and outclassed the others. In the end, we connected with her on Facebook. She is a musician, so she posted a lot of DIY videos of her alone in her bedroom making music. And there was something very rough and raw and heartbreaking about her music. Very authentically teenage. Over the years, I watched her grow up on Facebook. And I always had her in mind when I was writing this character, even though I didn’t know her at all. But then, when we started auditioning for the movie, we cast a wide net first. I auditioned young women from Stranger Things, from Hollywood and from London. We also did a non-traditional search around Pennsylvania, went to high schools and theatre clubs, but I still didn’t see anyone suitable for the role. So, I thought we have got to reach out to this girl and see what happens. And we got in touch with her on social media and begged her to audition. And first, she wasn’t interested at all. She said she was too busy with my music and her job. But we kept trying and she very, very nervously came to New York to meet with me. Very tentatively. We spent a whole day with her, but I knew as soon as she arrived, that she was the movie. I hadn’t really seen her in person for very long, so I didn’t know what to expect. But to work with her and to get her ready for the movie, really what I focused on was creating a human connection and bond with her and Talia, the other actress who plays her cousin. I wanted to create a friendship between them. And the close bond between the two characters that you see on screen is the bond between Sidney and Talia. 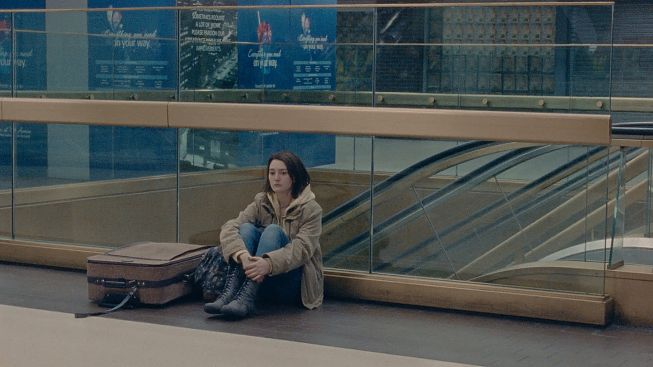 There’s so much at stake at the moment

What is also interesting in this regard is the way you place men around these two young women and how those men approach them – more often in a negative way than in a positive one.

I don’t think the work that I make is message driven, I am not trying to send a message to men about their behavior. But I wanted to ask them and invite them to walk in her shoes. I think we live in a culture with a lot of ambient sexism. And I wanted to bring the audience into the experience of being a young girl who was constantly navigating small moments of misogyny, and how much part of growing up as a young woman today is learning to deflect and to accept.

You are also, in a subtle way, very critical about the American healthcare system. In your view, what are the biggest shortfalls?

One aspect that I didn’t include in the film, because it I felt it would have been too much, is to look in detail at the problems that women under 18 might encounter in trying to get an abortion. We have all these parental consent laws, so you can’t get an abortion unless you ask your parents and they agree to accompany their daughter. But of course, that’s not really an option for so many young women in this country. The alternative to that, if they don’t travel to a different state, is to go to a judge, and the judge can give them permission. However, the judge’s job is to evaluate the maturity of the young woman, to see if she is mature enough to have an abortion. And to me, this is so cruel and ironic, because nobody is evaluating whether or not young women are capable of being mothers. So that’s something that I found very harsh about all of this, but I didn’t think it would work to include this in the film. It was a sequence I had in mind that I never ended up writing, and maybe I have some small regrets about that now. But on the other hand, for me, it was so much more about this young woman learning the complexities that are around her, all the obstacles that sort of keep her away from having control over her own body. And even though her journey is sad and painful, I think it takes a certain kind of woman to persist and go that way – and of course, women do it every day.

Are you worried at all that your film could get caught up in the recent discussions about abortion in the US?

I hope the film plays a part in deepening the conversation. It’s a divisive topic and there’s so much at stake at the moment. But I would like to think that it’s an important film not only for young women who are becoming more active and vocal in our country, but also for men to understand the impact of both trauma and restrictive bans.

As we mentioned earlier, your films, so far, are all themed around youth and you worked with a lot of young actors and first time performers…

I love it, I love working with them.

What do you love so much about it? Do you think it’s because of a certain rawness in their performance?

The immediacy they have, yes. They understand what they are doing there, but they haven’t begun to sort of overthink it. I did television and a teen show, and the actors there would always ask to see playback of the footage. But the kids in my films, they are bringing themselves into it in a very real and vulnerable way.

Not about youth. I’m done, the door is closed. Well, for now. Maybe.

Do you have a project in mind yet?

Yeah, it’s about a middle-class family in New York City. They are coping with the death of the matriarch, who was in her late 90s and her children are emotionally and logistically and practically totally unprepared for her death. If you think a little bit further, the story is about their paralysis and about making all of these end of life decisions. Then they hire a home care worker, who is an immigrant, and when they give her the keys to the apartment, it becomes her story and the point of view changes and it’s very much about the tension between death and survival.

Yes, definitely. I can’t do without.