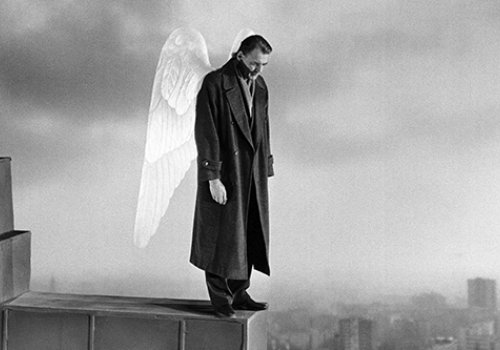 A city of light and darkness

There’s no shortage of movies that have used Berlin as a backdrop. But how many have captured the various contradictions of the city? The anonymous grey apartment blocks on one hand, the colorful street art on the other. The drab-colored conservatives rubbing shoulders with vibrantly-dressed club kids. Pensioners and artists, east and west, past and future… Perhaps no single movie can capture it all, but WINGS OF DESIRE comes pretty damn close.

For his follow-up to one masterpiece, PARIS, TEXAS, Wim Wenders decided to return to his roots and accidentally make another. After spending six years in America (many of them butting heads with Francis Ford Coppola), and impressing audiences with his refreshingly European take on Americana, Wenders focused his attention on a familiar city from his homeland: Berlin. But aside from a vague idea about an angel falling in love, there was no script. With the help of his two angel actors, Bruno Ganz and Otto Sander, as well as his friend, the Austrian poet Peter Handke, the script would be developed on-the-go, during production, one day at a time.

In most cases, this would be a recipe for disaster. But with this collection of talent, and with a group intention at getting toward a deeper understanding of a divided city and a divided human spirit, it achieved something transcendent.

The story is pretty simple. An angel longs for human experience, falls in love with a trapeze artist (played by the frequent Wenders collaborator Solveig Dommartin) and decides to cast off his wings. But before that climactic event happens, we spend 75 percent of the movie floating through the city of Berlin, listening in, as the guardian angels do, on people’s hopes and fears. These moments, shot in beautiful black and white by the legendary cinematographer, and former Jean Cocteau collaborator, Heri Alekan (who was 80 years old at the time!), are still impressive over thirty years later. The camera is often moving along in a spirit-like fashion, taking on the perspective of the guardian angel. We float out of one window, across a courtyard where children play, and in through another window. A woman wonders if her appliances will fit in her new flat, a teenager copes with heartbreak, parents cope with their heartbroken teenager. It feels both oddly genuine and completely cinematic at the same time. Many of these inner thoughts were written by Handke and they take on a kind of poetic cadence, an ongoing existential reflection that varies from the mundane to the quietly despairing. But when the angels put a gentle hand on a shoulder, the despair can turn to hope, sometimes.

One of the humans Otto Sander’s angel enjoys spending time with is credited as “Homer, the aged poet.” He’s played by the Jewish-German actor Curt Bois, who both Sander and Ganz were close to. Bois struggles to come to terms with his old age, and what will happen to his wisdom when he’s gone. He’s one of humanity’s storytellers, and he still longs to make sense of what’s happened to his city of Berlin. The scenes with Bois are some of the most touching in the movie, and they underline many of the film’s ambitions, as well as the motivation of Ganz’s fallen-angel: What good is being eternal and collecting all this wisdom if all you can do is stay behind the scenes and not doing anything with it?

While Ganz longs for the urgency of love, and falls for the enchanting Dommartin while she struggles at a small-time travelling circus, his decision to fall to Earth is cemented by Peter Falk. The American actor was a late addition to the production, added when Wenders wisely understood that the movie needed a touch of humor. (Apparently, the idea of reaching out to Falk belongs to Claire Denis, who was first director on the blessed production.) Falk not only plays himself, as an actor working on a local production involving a German-American detective during WWII, he also plays a former angel who fell to earth some thirty years ago. It is a stroke of genius, as there is something inherently otherworldly and cherubic about Falk (in that cigarette-smoking cherub kind of way) and every one of his scenes warms the heart and brings a smile to your face.

By including Falk, along with the French actress Dommartin, we also get closer to the reality of Berlin. Yes it is a quintessential German city, but it is also undeniably a city of the world. Already, in the 1987 that the movie takes place, the angels talk of refugees and we see a lot of people of color and listen in on thoughts that are spoken in a variety of languages. It is a city where people go in search of freedom and in an effort to find themselves, just as Ganz’s angel does, and just as I did. It’s a city of light and darkness as well as the joyful colors of life.

From time to time, the movie shifts briefly from black and white to color, until the final few scenes when Ganz has landed and is eagerly embracing life and looking for Dommartin. It gives the film an extra jolt of life as well, as does a foray into an elegant Berlin nightclub for a Nick Cave and the Bad Seeds performance. I have some problems with the film’s ending, I think it’s the only time when the film falls victim to the dangers of working without a script, but they don’t diminish what the movie has accomplished. We’ve been inside the homes and minds of people on both sides of the wall. We’ve spent time with the elderly and those dancing to Nick Cave. We’ve sat in a Mercedes Benz showroom and a run-down circus tent. We’ve wrestled with the demons of the past, and the uncertainty of the present, while remaining hopeful about the future. In other words, we’ve come about as close as you can to experiencing Berlin while sitting in a chair.