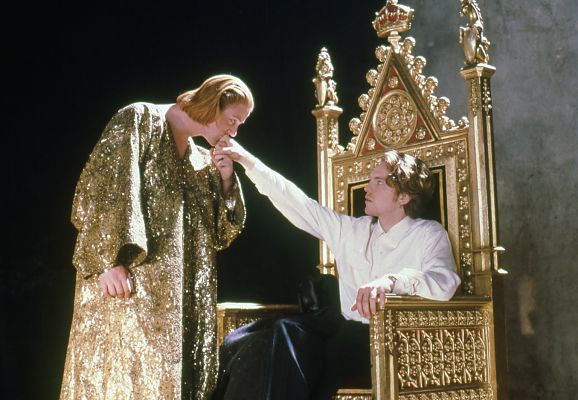 “A man will be forgotten in time and no one will remember our work,“ says Derek Jarman, angry and near death in his last film BLUE. Derek Jarman, one of the most important voices of the 70s, 80s and 90s, still hasn‘t been forgotten. On January 31st the filmmaker, artist and queer activist who died in 1994 would‘ve been 80 years old. To mark this occasion, the British Film Institute has restored and digitized many of Jarman‘s films.


Derek Jarman began his film career as a production designer in Ken Russell‘s notorious film THE DEVILS (1971). His first feature, SEBASTIANE (1976), about a pacifist Roman soldier who sublimates his queer desire by worshipping phoebus Apollo, was the first explicitly gay British film. In Germany, SEBASTIANE only became known after the success of Jarman‘s second film JUBILEE (1977/1978). JUBILEE was the first film about the new punk scene and remained the most important film of the movement: Queen Elizabeth I travels across late 70s London with the magic of occultist John Dee and the help of the spirit guide Ariel and gets involved in a scene of nihilist and homicidal punks like Vivienne Westwood model Jordan playing “Amyl Nitrate“ and Toyah Wilcox playing “Mad.“


Jarman began his queer reading of Shakespeare with his adaptation of THE TEMPEST (1979) which was shot in Stateleigh Abbey, a derelict English country house. He continued this with THE ANGELIC CONVERSATION (1985), with Judy Dench reciting Shakespeare‘s sonnets with a soundtrack from Coil juxtaposed with super-8 images blown up to 35mm which Jarman often slowed down. The effect was a celebration of gay desire and the male body. In 1986 the right-wing British government and Margaret Thatcher reacted to the strengthened LGBTQ+ movement by issuing Section 28, similar to today‘s laws in many eastern European countries, which forbid the “promotion“ of the homosexual lifestyle in schools and public institutions and deprived numerous LGBTQ+ organizations of public funding making it more difficult to use public spaces. Jarman was one of the most important activists of a widespread movement against Section 28 - a legislation that was upheld until the year 2000.


After JUBILEE, CARAVAGGIO (1986) was Jarman‘s most successful film with the mainstream arthouse audience. The love triangle between the queer painter, his model and his girlfriend was enveloped in opulent images with a rarely before seen precision of lighting which recreated Caravaggio‘s paintings and made the film images look like paintings. In the winter of 1986 Jarman found out that he was HIV-positive and spoke about it openly. In the social atmosphere of the beginning of the AIDS pandemic, this was an incredibly brave step which also led to Jarman receiving death threats. 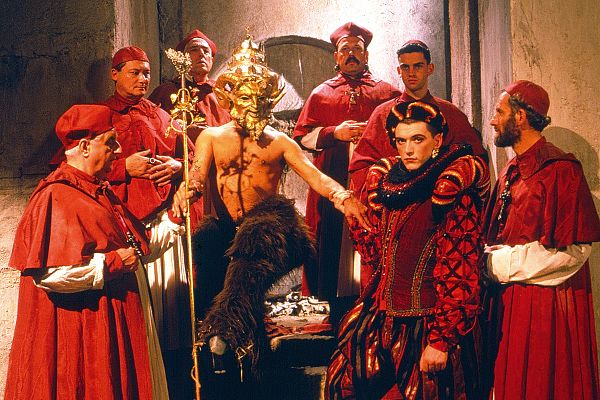 "I place a delphinium, blue, upon your grave"

After the big – and lengthy – 35mm production of CARAVAGGIO, Jarman decided to film cheaper and quicker films on super-8. At the beginning of THE LAST OF ENGLAND, a punk destroys Caravaggio‘s painting “Love Conquers All“ (National Gallery Berlin) and masturbates with the painting. The film with Tilda Swinton and Mayo Thompson with music by experimental punk bands Pere Ubu and The Red Krayola is a rageful indictment of the devastation caused by AIDS and Thatcherism. WAR REQUIEM (1988), Jarman‘s visual interpretation of the oratorio of Benjamin Britten, combines the memories of an old soldier (Laurence Olivier in his last role) with historical documentary footage, Jarman‘s films were become more minimalistic and akin to chamber plays.


During the production of THE GARDEN (1990), the tragedy of a non-binary couple against the backdrop of Jarman‘s house and garden as well as the neighboring nuclear plant, Jarman became ill. EDWARD II (1991) is a gay interpretation of Christopher Marlowe‘s royal drama. Jarman‘s last narrative film was the Brecht-oriented tragicomic WITTGENSTEIN (1993). When he shot BLUE (1993) he was already in the process of going blind. BLUE shows an image of monochrome blue while Jarman talks about life, perception and color accompanied by a complex sound and music collage. Some of the texts from BLUE were published in Jarman‘s book Chroma (Merve publishing house).


For those who want to experience the love, anger, the revolutionary energy and the physicality of cinema again should watch Derek Jarman‘s films – or screen them, which some cinemas will be doing in January. Salzgeber distribution also has a comprehensive collection of 35 and 16mm films by Jarman (this is directed more to the cinemas that can still screen analogue films.)