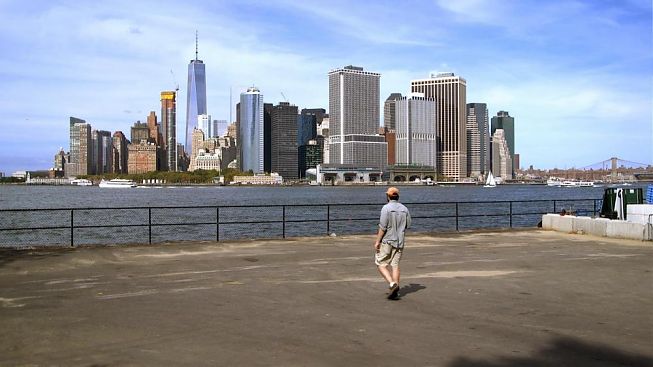 New York – The World Before Your Feet

Matt Green has been walking along the Hudson River for more than six years. He takes photographs, researches, and is amazed about the details. His goal is to walk in all the five boroughs of New York.

Exploring New York City is fun. Whether it‘s Times Square, Fifth Avenue, MoMA, or Central Park – there‘s more than enough to see. As a tourist you walk till your feet ache and fly back home after a few days feeling like you‘ve seen the most important sights. Matt Green has a very different approach when he walks in the Big Apple. The 37 year old engineer from Virginia has been walking along the Hudson River for more than six years and 8000 miles. His goal is to walk across all the five boroughs of New York. He even walks in inner city parks, beaches, and cemeteries. You can follow his city trek on his “I‘m Just Walkin‘“ blog. But it‘s not just about taking streets off the list for him, he‘s interested in the multifacedness of the city, its history, and its residents. He photographs, researches, and is amazed about the details – fig trees in courtyards, hair salons called “z“ and 9/11 wall murals.

Green lives in the here and now and discovers new things every day. He doesn‘t have an apartment. He sleeps at friends places, is a couch surfer, and works as a catsitter. Jeremy Workman follows him with the camera – without a film crew – meeting him in the summers and winters in different boroughs and capturing how Green talks to a various selection of people. In his inspiring documentary, Workman portrays this philosophical urban explorer who is pursuing his goal no matter what others say. THE WORLD BEFORE YOUR FEET is a film that fixes its gaze at all the small things on the wayside and makes you want to walk and rediscover New York City or your own city – it doesn‘t have to mean 8000 miles all at once.