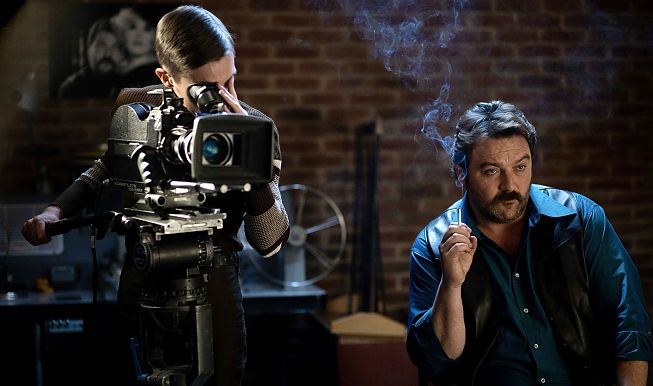 Notes on a very special edition by Sean Erickson

Against all odds, the 72nd Berlinale International Film Festival has begun. After an two-part odd mix of online and outdoors last year, we’re back indoors this time around. So far, the atmosphere around the Berlinale Palast in Potsdammer Platz feels more muted than it’s been in previous years. There are more schnelltest centers COVID security checkpoints than food trucks and festivities. Still, it’s hard not to be impressed that it’s all happening. All the checkpoints, test centers, mandatory indoor masks and reduced seating capacity do lend a sense of low-risk. No doubt other festivals are keeping a close watch on this Berlinale with the hope that, even in the time of Omicron, there may be a way to keep the communal film festival experience alive.

So, what’s on the menu this year? Let’s start with the opening night movie, PETER VON KANT (Competition section), the latest from frequent Berlinale guest Francois Ozon. It’s hard to imagine a more appropriate movie to launch this year’s edition. Ozon’s movie is not only a faithful adaptation of Rainer Werner Fassbinder’s THE BITTER TEARS OF PETRA VON KANT, it turns the central character into an overt stand-in for Fassbinder himself. Ozon’s decision to turn Petra the fashion designer into Peter the film director, is rather brilliant. And Denis Menochet’s performance is exuberant and spot-on. His Fassbinder is equal parts pathetic and sympathetic as this film, like the original, dives into the murky waters of codependence and the fragile ego of the artist. What’s surprising is that Ozon and Menochet are able to wring a lot of uncomfortable comedy from the material before it settles into a more broad melodrama in the final acts.

Speaking of fragile artistic egos, another Berlinale alumni, writer/director Peter Strickland has brought his newest to this year’s festival. It’s called FLUX GOURMET, and it’s surprisingly funny. With a fantastic cast, headlined by Gwendoline Christie and Asa Butterfield, FLUX GOURMET (Encounters section) charts a monthlong artists residency taking place at Christie’s Sonic Catering Institute. That’s right, it’s a food-centric sound artist residency, and the trio who make up the art collective are not what you’d call a happy family. Egos clash, tempers heat up, pyscho-sexual tensions simmer and boil over, it’s a rollicking good time. Some of the press material suggest elements of horror or gore, but that’s misleading. This is along the lines of BERBERIAN SOUND STUDIO and THE DUKE OF BURGUNDY, except with way more jokes. Really, it may be worth watching just to revel in Christie’s amazing make-up and wardrobe.

While French auteur Claire Denis has some transgressive and outre films to her credit (including 2018’s HIGH LIFE), her latest, BOTH SIDES OF THE BLADE (Competition section), is a more grounded relationship drama centered around the impressive talents of frequent collaborator Juliette Binoche and the recent co-star of TITANE, Vincent Lindon. These two have a seemingly idyllic relationship that is quickly put to the test when a Binoche’s former lover reenters the picture as a Lindon’s business parter. Secrets and lies pile up, communications break down, and many tears are shed. Some fans might feel like this is a step backwards, especially considering the achievements Denis made in her last few films. But BOTH SIDES OF THE BLADE still packs an impressive emotional punch, and features two performances that are going to be hard to be beat when the acting awards are handed out.

Another name that pops up frequently in Berlinale competition line-ups is Rithy Panh, the Cambodian filmmaker working out of France, who’s been making powerful films that often blur the line between art installations and documentaries. His newest film, EVERYTHING WILL BE OK (Competition section), might bring back memories of his 2013 film THE MISSING PICTURE, in that it uses handmade figures to help tell his story. Like most of Panh’s films, this story involves taking a difficult look back at our recent past. This time around, Panh evokes George Orwell's "Animal Farm” by creating a topsy-turvy world where humans are imprisoned by a group of animals that are quickly devolving into a quasi-authoritarian state. Once again, Panh holds no punches in showing the worst and most hypocritical aspects of 20th century humanity. It’s not an easy watch, and it may be an endurance test for some. But if you’ve been on the fence about becoming vegetarian, this movie might be the final push you’ve been waiting for.