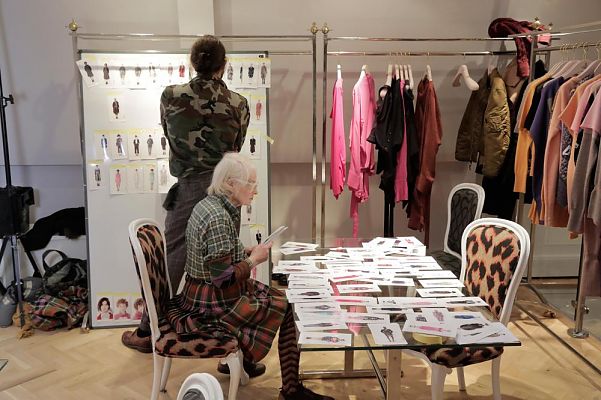 Vivienne Westwood invented punk, or at least British punk fashion, along with Malcolm McLaren. Today, she runs a successful and independent fashion label with her partner Andreas Kronthaler. A documentary.

Dame Vivienne doesn‘t want to talk about her youth, the late Malcolm McLaren who died in 2010, or the Sex Pistols, but she does it anyway. Westwood was an elementary school teacher who dropped out of art school due to financial worries. She was a divorcee with a son living with her parents when she met McLaren and they became an explosively creative duo. They sold rock ’n roll records and created teddyboy fashion which Malcolm would wear, then went on to make fashion for rockers, called their store in King‘s Road 430 “SEX“ and sold fetish wear, s&m, and bondage toys and developed a provocative punk style from it. Malcolm was also the manager of the New York Dolls and started his own band made up of Saturday worker Glem Matlock and store customers. Along with the Sex Pistols they clothed Chrissie Hynde, Siouxsie Sioux, Adam Ant, and their followers. “SEX“ was renamed “World‘s End“ in 1980 and became a post-punk fashion pilgrimage site in the 80s. After the New Romantic collection “Buffalo Gals“ (1982) McLaren left and Westwood gradually built her fashion empire without ever being bought up by a big fashion label.

Lorna Tucker‘s documentary shows Vivienne Westwood in many great archival shots, but the focus is on her current work together with her life and work partner Andreas Kronthaler. Westwood made sure not to lose the control of her company and stopped further expansion while also being an activist against climate change. Lorna Tucker‘s documentary gets very close to Westwood‘s likeable personality. At 77 the boss still bikes to work and tries to give a personal touch to each piece in her collection.