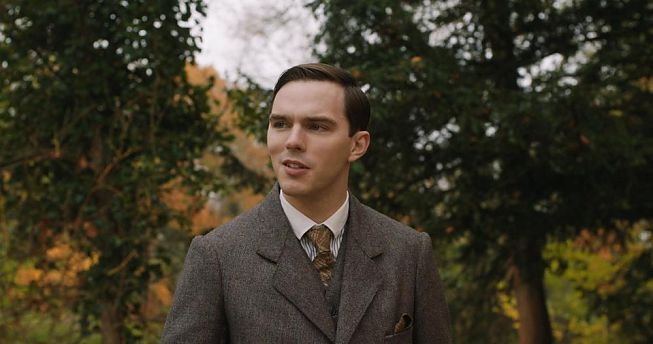 Dome Karukoski‘s biopic of intellectual and language lover Tolkien focuses on his early biography – the orphan‘s school days and Tolkien‘s experience in World War I.

Dome Karukoski‘s biopic about John Ronald Reuel – known around the world as J.R.R. - Tolkien begins and ends with apocalyptic-nightmarish impressions from the battlefields of the western front. The staging evokes images from Peter Jackson‘s film adaption of Tolkien‘s “Lord of the Rings“ and “The Hobbit,“ two of the most successful trilogies of all time. Karukoski uses these associations to establish a connection between the experience that the then-24 year old creator of these stories had at the Battle of the Somme in 1916 and the British author‘s (Nicholas Hoult) life and work.

The existential experience of World War I is the culmination point of the narrative. They are the definitive trigger of Tolkien‘s artistic creation, a man who would become the father of modern fantasy literature. But the center of the film revolves around Tolkien‘s time as a youth and young adult. Karukoski resolves the difficult task of transposing the life path of intellectual and language lover Tolkien on screen by linking Tolkien‘s unstable early biography as an orphan to his later work. Tolkien‘s school days take up a lot of space, which is where he starts a small club for like-minded people, the “T.C.B.S.“ (Tea Club Barovian Society). The kindred spirits meet regularly to discuss art and literature and inspire one another. In addition, there‘s the deepening of his relationship to Edith Bratt (Lily Collins), whom he meets at his foster mother‘s home, and who would later become his wife, as well as the beginnings of his path to becoming a professor of linguistics at Oxford. TOLKIEN is a coming-of-age drama reminsicent of Peter Weir‘s DEAD POET‘S SOCIETY in its tone and themes, but it also wants to show how human horror took hold of Tolkien‘s fantastical work.