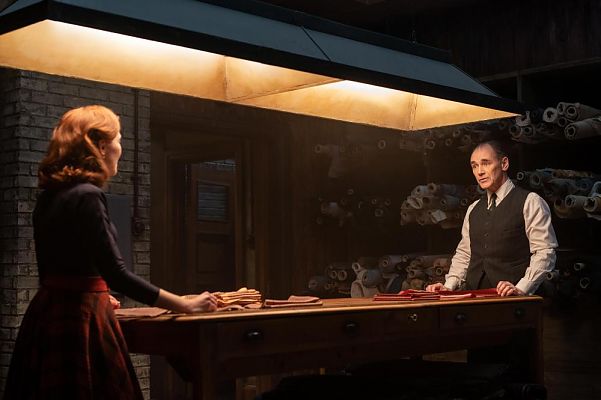 Brit Leonard‘s (Mark Rylance) tailor shop is used as a dead drop by a gangster organization. The tailor soon finds himself caught in the crossfire of rival gangs.

Everything is made to measure for Leonard (Mark Rylance): the tailor loves order. However, this means that being in Chicago in the year 1956 is the wrong place for him, because the only thing that‘s organized there is criminality. Gangs rule the streets, the families of Irish and French immigrants are waging a bloody war for dominance. Meanwhile, in Leonard‘s shop, which is runs with the help of his younger assistant Mable (Zoey Deutch), is a place of peace in the eye of the storm. But the chaos also hits his doorstep, and he has no choice but to lend the gangsters his workshop for their daily letter exchanges with a mysterious criminal organization called “The Outfit.“ And so shady figures go in and out of his store and the tailor maintains his British discretion until one night when the rivalry escalates and Leonard is forced to pick a side.

Mark Rylance embodies the refined Brit with calm and reserve. His nuanced acting is at the center of this ambiguous chamber piece which has quite a few twists in its two hour running time, with a showdown that goes a bit overboard. Screenwriter Graham Moore (THE IMITATION GAME) uses the limited space to his advantage, thereby condensing the tension, in his directing debut. However, it becomes obvious that the THE OUTFIT was shot in a London sound stage. The film doesn‘t have any exterior shots which probably has to do with the special shooting conditions during Covid. Oscar winner Mark Rylance, who learned how to tailor in London‘s Savile Row from the renowned “Huntsman Tailors,“ succeeds in casting a spell over the audience.