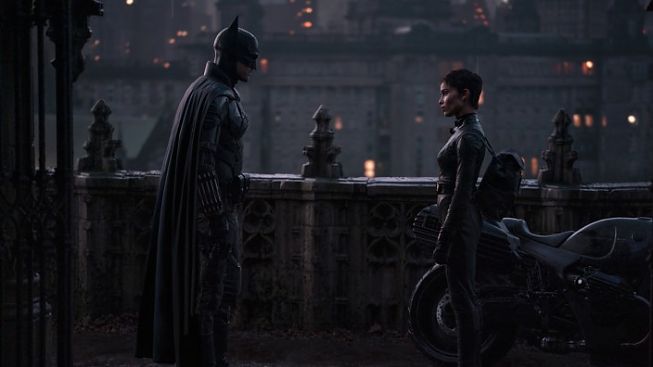 Matt Reeves (CLOVERFIELD) reboots the BATMAN-franchise, with Robert Pattinson as the caped crusader, Zoe Kravitz as Catwoman and Colin Farrell as the Penguin. The trailer suggests it will get gritty. And who is the Riddler?

Disclaimer: THE BATMAN is the first film of the franchise that I have seen and I‘ve never read the comics either. My knowledge of the backstory and the Gotham universe are rudimentary at best.

Gotham City, aka New York, is a dark, dangerous place with almost perpetually rain. The trash is on the street, the skyscrapers with their neo Gothic turrets radiate a morbid mood, and there‘s crime at every corner. The bat signal, which the police beam at the sky, is a distress call, a warning and a desperate attempt to deter, which doesn‘t do much. The Batman (Robert Pattinson) can‘t be everywhere at the same time. On October 31st, Halloween, the day in which the film begins, he can‘t prevent a robbery or the murder of the mayor, he also can‘t prevent a sprayer from spraying “broke“ on the pillars of the stock exchange. But he does protect a young man from a street gang. After Batman has brutally beaten up the small-time gangsters, the rescued man begs him not to do anything to him.

After this atmospheric entry into the abyss of the city, the film dives into the depths of the corruption which involves the government, the police and the drug cartel. The mayor is just the first in a series of victims involved in fraud and crime which the “Riddler“ (Paul Dano) has chosen to eliminate. He leaves behind graffiti at the scenes of the crime – a strange symbol and the words “no more lies“ - as well as a colorful greeting card addressed to “The Bat Man“ with a riddle which leads to the next victim. I lost some interest in the thicket of intrigue, betrayel and crime amongst gangsters, which also includes the “Penguin“ (Colin Farrel) and the cops. The atmosphere is great, depressive noir with a dark, driving score by Michael Giacchino broken up by explosive stunts and pursuits. The exact connections doesn‘t seem so important, and the people are morally scintillating but psychologically one-dimensional. What‘s clear is: besides commissionar Jim Gordon (Jeffrey Wright), who trusts Batman, everyone has skeletons in their closets or are planning revenge. They are also looking for “the rat,“ the traitor amongst the cops, and then there‘s also the motorcycle master thief Selena Kyle (Zoë Kravitz), who has a plan of her own.

Tracing the murders leads Batman, aka sad rich kid Bruce Wayne, to his own past and revelations about his father, and that‘s the root of the madness which propels the Riddler to plan a large-scale destruction plan which takes up the last third of the film. The crime noir a la SEVEN becomes an apocalypse in the rain which leans on the January 6th events – a scene in which the Riddler calls on his crazy social media followers to arm themselves and implement his plans is especially reminiscent of the Trump followers who stormed the White House. It‘s a stylistic break, but it infuses the three hour film with new energy that lasts until the end.

THE BATMAN is not as complex and profound as it thinks, but it has a lot of fun – if you can call the almost suicidal mood of the film and the superhero “fun“ -with the shades of revenge and justice that it acts out. Is Catwoman‘s/Selena‘s private vendetta legitimate? Does the Riddler want to renew the city with his crazy plan? What about Batman‘s vigilante activities, in which he hits two heavy-load transport vehicles with an oil tank with, one would think, many dasualties? Where does the border between good and bad lie? Batman himself has doubts. But crime never stops. And the bat signal illuminates once again in the night sky. 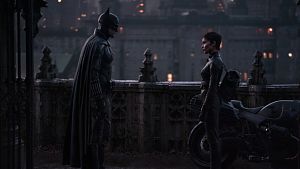 Matt Reeves (CLOVERFIELD) reboots the BATMAN-franchise, with Robert Pattinson as the caped crusader, Zoe Kravitz as Catwoman and Colin Farrell as the Penguin. The trailer suggests it will get gritty. And who is the Riddler?