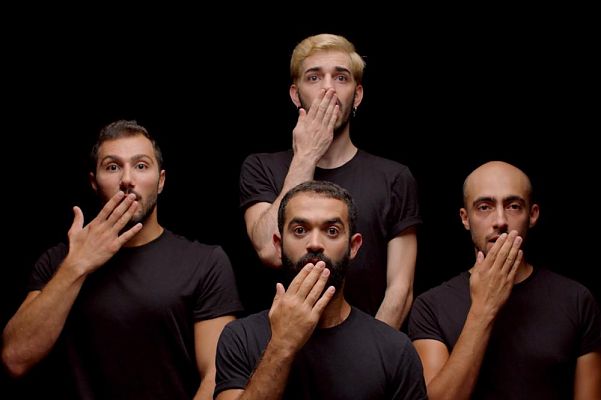 Shall I Compare You To A Summer's Day?

A fairy tale, a performance, a musical. Quotes from the author Rabih Alameddine are mixed in with Egyptian pop songs. Hassan‘s poetic feature-length debut is high on love, pondering about queer life and love – and like every good fairy tale it ...

The moon tells a story of two men who fall in love. Or is that Sheherazade and not the moon that is hanging above them like a disco ball? You can only see one of the men, in a room made of neon lights and color. A choir of bygone lovers join, flickering lights, asking about first love, the second, the third, fill the room. During the storytelling, new stories are added, as a fairy tale-like animation about mermen and their secret lovers, as a sexy memory of a club night with a threesome. The men sit in front of a green screen, color behind them, a forest, a beach, apartments, journeys, portraits. They talk directly into the camera and the confessions turn into a dialogue with the person behind the camera. “What was it like when we loved each other?“ he asks.

But the stories about Grindr, polyamory, loves and losses aren‘t just recapitulated. There‘s also singing. A fairy tale, a performance, a musical. Quotes from the writer Rabih Alameddine mix in with Egyptian pop songs. This room in front of the green screen becomes more and more of a safe space in which the men negotiate their desires and relationships. Vulnerably, gently, sensually, and hopefully. Director Mohammad Shawky Hassan harkens back to the traditional narrative outline and images and shifts them to a queer, arty present. He interweaves the individual memories into a collective experiential space that floats between Egypt, Lebanon, and Berlin, a magic, neon-shimmering soap bubble. As fragile and fantastical as love itself. Hassan‘s poetic feature length debut is is high on love, pondering about queer life and love – and like every good fairy tale it has a happy end.