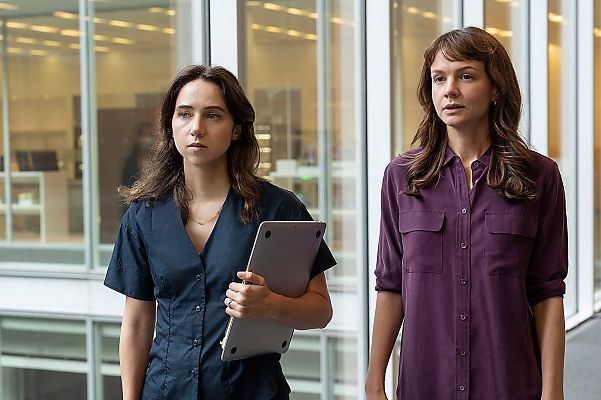 An adaptation of the eponymous book that journalists Jodi Kantor and Megan Twohey wrote about their research into Harvey Weinstein.

“Hollywood was an organized system for abusing women,“ write Jodie Kantor and Megan Twohey in their book “She Said,“ that has now been adapted to the screen by screenwriter Rebecca Lenkiewicz (SMALL AXE, IDA) and directed by Maria Schrader. Kantor and Twohey are the writers of the New York Times article that documented the systemic abuse and rape of actresses and employees of film producer Harvey Weinstein. In their book, they described the research process that turned out to be very difficult because many of Weinstein‘s victims were forced into secrecy due to signing NDAs and actresses had to deal with a lot of career drawbacks or even the end of their careers if they spoke to journalists. Is it a coincidence that SHE SAID is a production of Annapurna Pictures, Megan Ellison‘s company who is the daughter of “Oracle“ founder Larry Ellison, a company that is swimming in their own money and isn‘t reliant on cooperations, and that a German director and a Polish screenwriter is adapting the biggest scandal in the US film industry since the McCarthy era?

Schrader‘s film has to overcome many pitfalls – not to mention the threats of private lawsuits. Many protagonists are so famous that they can‘t simply be replaced by other actors. No one wants to see a Weinstein copy abuse and rape women on screen. Actress and activist Ashley Judd and Lauren O‘Connor, who was Weinstein‘s assistant in London in the 90s, play themselves here. The two women were also the first ones who were ready to testify about Weinstein‘s abuses. Other famous protagonists like Rose McGowan and Gwyneth Paltrow are not heard and only seen from the back. The women describe Weinstein‘s acts off screen while Schrader shows the hotel rooms and corridors where the abuse took place. While Kantor and Twohey are primarily interested in journalistic details and turning points in their book – like in the case of Fox moderator Billy Reilish, whose NDA and hush money played an important role when he got fired – Schrader and Lenkiewicz highlight the emotional consequences and practical outcomes on the victims‘ lives. Their film begins with a scene in which very young, cheerful Welshwoman Lauren stumbles into a film set and finds a job opening there. In the next scene, she is seen screaming and crying down a street. Flashbacks from the women‘s perspectives keep getting added into the research narrative. They are the most emotionally intense moments in the film, perhaps along with the conversations with the women who were never able to get a job in the film industry again after getting abused by Weinstein. These are the scenes in which the systematic problem of misogyny in the industry are most clear.

Jodi Kantor (Zoé Kazan) and Megan Twohey (Carey Mulligan) prioritize realistically reflecting the world, according to the journalists. Mulligan‘s performance is more layered and present than Kazan‘s, especially in the scenes in which she screams at Donald Trump on the phone or when Weinstein appears in the office unannounced or when she is challenged by witness Zelda Perkins to take apart the entire legal, financial and cultural system that allowed for Weinstein‘s abuse to continue over decades. She succeeds in showing many mixed feelings of anger, doubt, amusement, empathy and determination which are worthy of an Oscar nomination. SHE SAID is an excellent film about outstanding journalistic work. 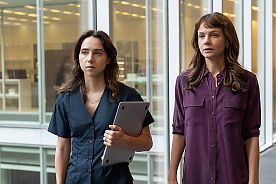 An adaptation of the eponymous book that journalists Jodi Kantor and Megan Twohey wrote about their research into Harvey Weinstein.