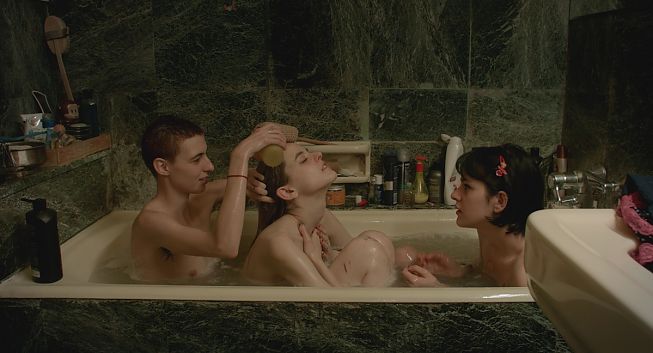 Eva is what is called an “influencer,“ a term that is often used disparagingly. But you could also say: she is an artist with internet access.

SEARCHING EVA is a documentary character study of Eva Collé, an Italian social media star living in Berlin. A fashion model, sex worker, and blogger, Eva has followers all over the world. Comments from her anonymous fans, shown in white text on a black screen, represent strangers who project their dreams, hopes, and anxieties onto her. The first time we see Eva, she is buried in sand and staring directly at us, the sound of the ocean nearby.

It would seem to director Pia Hellenthal that Eva came from the sea. Like her narrative counterpart Mona in Agnes Varda’s VAGABOND (1985), Eva lives an itinerant life. We watch her in beautifully filmed vignettes as she drifts through her digitally documented life, posing for selfies and professional photographers, having sex with men (though she’d rather be eating bread than fucking), visiting her family, partying with girlfriends, and exploring new flats and potential roommates. She travels light, but carries a lot of psychological baggage. This self-described bisexual-Virgo-musician-feminist-anarchist has body dysmorphic disorder, is the daughter of junkies, and a recovering addict who still amuses herself with needles and white lines.

Yet, labels only work for internet profiles. Within the world of this creative documentary, which could be mistaken for a fictional film, identities are as fluid as manipulated genres. There is also a breaking-down of the traditional gaze. For Varda, characters who encounter Mona speak to the viewer directly, telling us how we should see her. But for Hellenthal, it is Eva who looks at you.

In one memorable scene, Eva sits naked in a bathtub, her bangs and long black hair (most likely a wig) covering her tattooed body. As she looks directly at us, we hear her read a blog entry in narrative voiceover. Eva imagines a board game that depicts the life of a woman in our century. A woman rolls the dice, Eva explains, and moves along a track of numbered steps. Toxic boyfriends, sexual assault, pregnancy, and eating disorders are the perils that cause the player to retreat or skip turns. “You win, if you make it alive to the end,” she concludes.

At the beginning of VAGABOND, we know Mona will be a loser of the game. But Eva envisions a different destiny. Will it be revolution, or a casual return to the beach?

“Your life is so cool and interesting. It’s kind of like an indie movie,” read the words of one admirer. In this new-millennium take on transience and freedom, there is no more Mona. There is only Meta.

SEARCHING EVA is indeed that beautiful indie film, but one totally dependent on your complicity.