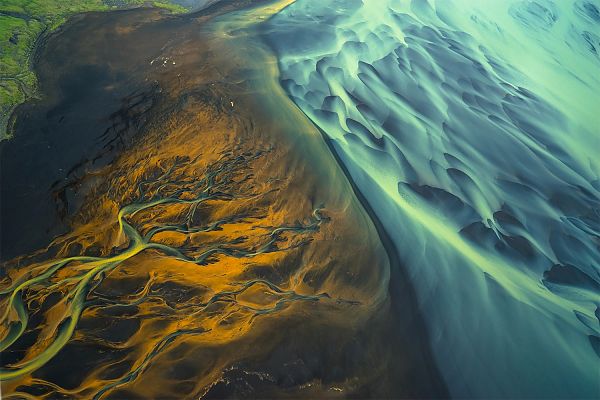 RIVER is pure luxury. A hired orchestra, Willem Dafoe as the narrator and footage of rivers that – without exaggeration – are some of the most beautiful and sublime images that a documentary has ever shown.

RIVER is pure luxury. A hired orchestra, Willem Dafoe as the narrator and footage of rivers that – without exaggeration – are some of the most beautiful and sublime images that a documentary has ever shown.

The camera work is by Yann Arthus-Bertrand, who has dominated the genre with films like PLANET EARTH and TERRA and has outdone himself here. With a deep understanding of color contrasts, the interplay of shapes, and framing he creates images that create breath-taking effects of disassociation and harmony from the microscopic level all the way to planetary ones. With some shots, it is long unclear what size the object actually is which fits well with the restrained and powerful narrative. The film takes the river as a metaphor in order to reflect on expansion and connection on a spatial and temporal level: like a river, the traditions of the past and the actions of the present flow into the future and lead to the trenchant question “are we good ancestors?“ Considering climate destruction and pollution, especially of rivers, the question can only be answered with a clear “no.“ Like in Edward Burtynski‘s cinematic reflections of the Anthropocene (MANUFACTURED LANDSCAPES, 2006; WATERMARK, 2013; ANTHROPOCENE, 2018) moral content is conveyed through monumental imagery. It is the multi-faceted and productive image of the river wich frees it from criticisms that are thrown at Burtynsky‘s films: that the beauty of the destruction on display glorifies more than it criticizes. And even if the answer to the „are we good ancestors“ questions is already clear – a question that is asked by Willem Dafoe is difficult to ignore.