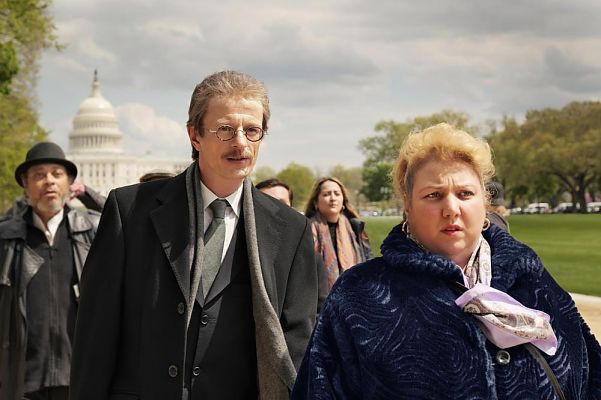 Rabiye Kumas, a Turkish housewife and mother who is clueless about legal and political matters, has been fighting for the release of her son from Guantánamo prison for five years with the help of a German human rights lawyer.

If the story couldn‘t be verified, the plot of Andreas Dresen‘s new film would be too good to be true. Rabiye Kurnaz, a Turkish housewife and mother who is clueless about legal and political matters, has been fighting for the release of her son from Guantánamo prison for five years with the help of a German human rights lawyer, taking it up with the US Supreme Court and finding success in the end. Murat Kurnaz is released, acquitted, and has been living comfortably in Bremen working as a social worker ever since. This is Hollywood material, the classic story of a seemingly hopeless underdog who triumphs in the end against all odds. Andreas Dresen and screenwriter Laila Stieler tell the story from the perspective of Murat‘s mother Rabiye and lawyer Bernhard Docke, the tireless fight against injustice, legal pitfalls and the ignorance of German authorities. Primarily, however, it‘s a fantastic comedy about the unexpected friendship between them, beautifully played by Meltem Kaptan and Alexander Scheer.

I wanted to be very critical, because the media coverage seemed too cutesy, but the film won me over, I kind of fell in love with the brilliant Turkish mother lion and her German lawyer, I couldn‘t help it. Meltem Kaptan deserved the Berlinale Award for Best Actress, she gives the film its energy center and has some great punchlines. They could‘ve given Alexander Scheer the Supporting Actor Award, the film thrives on their interplay, her power, his precision, her naivety, his sacrificing persistence. Dresen‘s film is heart-warming, funny, and it‘s great to see well-made stories about good people. RABIYE KURNAZ GEGEN GEORGE W. BUSH isn‘t a film about Guantánamo, it‘s a film about a wonderful friendship. That‘s what‘s great and that is also the problem and the criticism. You feel comfortable in the cinema since the topic loses its darkness.

The horror which Guantánamo represents, the deprivation of rights, torture and sadistsic suffering is left out of the chosen narrative perspective, they don‘t infiltrate the film‘s cosmos. There just one time when the topic is shortly broached. There‘s a Hotel TV showing the news about the torture in Guantánamo and the protagonists realize that Murat is doing worse there than they thought. And what does the screenplay do with this moment? It turns it into one of the funniest dialogues in the film, a masterpiece of situational comedy, you can laugh again and you don‘t have to really worry, because you‘re with Rabiye and Bernhard, and things are bound to turn out well in the end.

This fundamental problem is a similar one to PERSISCHSTUNDEN, in which a concentration camp prisoner survives by pretending to be Persian, inventing a language and being smarter than the stupid Nazis. By watching a character survive, the mass murder surrounding him becomes more bearable and the film turns into a satisfying, well-entertaining cinema experience despite the Holocaust topic. Roberto Benigni‘s LIFE IS BEAUTIFUL also comes to mind, another “nice concentration camp film“ that you can enjoy because of its comedy and warmth. The gap between the subject and the form isn‘t as big with Dresen. However, the question remains if it does justice to the topic with such a pleasant, comforting film, whether it‘s not an unbelievable minimization, whether a film about Guantánamo shouldn‘t at least have a few moments of visceral horror. A film like this will have much more of an audience and maybe raise awareness, you could argue, and no one wants to see a serious film about Guantánamo. That‘s true. And telling films what they can do and what they can‘t is a no-go. But it‘s still a moral dilemma. One I can‘t solve. 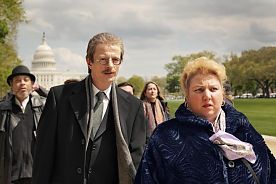 Rabiye Kumas, a Turkish housewife and mother who is clueless about legal and political matters, has been fighting for the release of her son from Guantánamo prison for five years with the help of a German human rights lawyer.