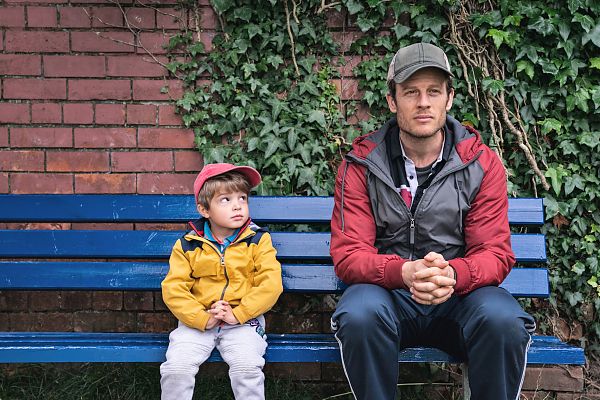 A Northern Irish window cleaner has cancer and knows he doesn‘t have much time left. Before he dies, he wants to find the right adoptive family for his son.

John (John Norton) looks like a tough guy with a scar on his nose, neck tattoo. He learned to hide his feelings, and this is very important to him in his current situation. The North Irish window cleaner is a single dad and is looking for adoptive parents for his young son Michael, because John knows he is going to die soon. Uberto Pasolini‘s sensitive, loving film NOWHERE SPECIAL takes us on a father and son journey with four different parents and a single woman who applied for adoption. It isn‘t the big moments that are the most moving. Neither the doctor‘s notification about John‘s dwindling time nor the death itself are part of the film. But the narrative immerses us in John‘s interior world and his sadness. In the short scenes in which he meets the people that would potentially raise Michael, he has to decide about the future. The rich family offers a good education and a class change which is barely possible in modern society, but should quiet, gentle Michael really go to an elite boarding school after the loss of his father? The postman family has looked after many foster children and there‘d be a loving older sister, but isn‘t the father too crass? The dominant woman who asks Michael to give back the stuffed toy that he got from her husband and which he shyly clings on to – John wouldn‘t even trust her with a dog. Yet the system chose her as a possible adoptive parent. The social workers get restless, young Shona, who is in charge of John‘s case, could lose her job because she‘s breaking so many rules. Time is running out. Who can offer enough love, security, comfort? The small observations are what are really touching: John stops at a crosswalk and looks at a boy, a bit older than Michael, as he walks over the crosswalk in his school uniform and backpack. He turns around one more time while driving. It‘s an internal goodbye to his son‘s future which John will not get to experience. The end credits exist for films like this: you can sit in the dark for a few minutes and dry your eyes. It took me 14 minutes to do that in this film.