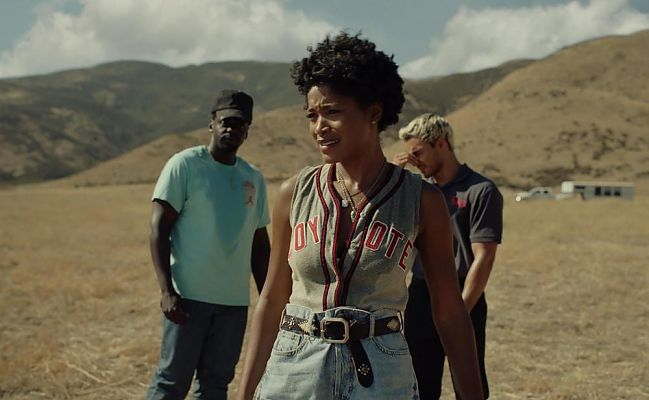 In Jordan Peele‘s (GET OUT) new horror film, a ranch and aliens play a role.

Jordan Peele‘s US and GET OUT were clearly part of the horror genre, but his most recent film, the very entertaining NOPE, leans more towards B-movie with its wild compilation of different film traditions – Horror! Western! Aliens! Like the best films in the genre, NOPE constantly surprises with its twists, images and plot combinations that you‘ve never seen before, or at least not like this. Peele doesn‘t shy away from speculative trash, and the CGI alien transforms over the course of the film from a creepy, barely visible presence in the cloudy sky to a model that could‘ve come out of a 1950s hobby workshop.

Unlike the traditional B-movie fare which was filmed quickly and cheaply, the motifs and references are meticulously constructed and excellently filmed and the cast is fantastic and realistic. At the center is horse trainer OJ (the classic silent hero, unshakeable, also at the eye of the storm: Daniel Kaluuya) and his sister Em (quick, restless, loud and loyal: Keke Palmer). They are the heirs of the show horse farm “Haywood Hollywood Horses,“ and their great great grandfather was the Black jockey in Edward Muybridges‘ world-famous “film“ sequence (it‘s a sequence of individual photos) of a horse in motion. The moving image pioneer Muybridge really existed, however the jockey‘s name is unknown. Business isn‘t going so well and OJ has to sell the horses bit by bit, mostly to ex child star Rick (Steven Yeun) who runs a small western theme park. When strange phenomena can be seen over the ranch sky, Em sees it as a chance to make money with UFO photos. However, the apparition turns out to be territorial and deadly and the endeavor turns into a battle for survival.

From the credits that shows Muybridge‘s horse sequence to the very last image of the film, NOPE builds a rich web of references that deal with Black experiences in the film business but also the defining and all-consuming presence of the media – from the analog hand crank camera to murderous TV show entertainment and surveillance cameras. The UFO hunting team surrounding OJ and Em gains new members with enthusiastic young electronics market salesman Angel (Brandon Perea) and the radical analog cameraman Antlers Holst (reminiscent of Werner Herzog: Michael Wincott). When dealing with the insatiable creature the most important thing is: you can‘t let it “gaze“ at you, you can never look at it, you have to remain invisible.

NOPE confidently toes the line between horror and comedy. The border between the sublime and banal, the ridiculous and disturbing, shabby “make believe“ and “the yonder“ is razor-thin. Peele successfully manages to capture both in one shot, in one motif. Like with the “Sky Dancers“ - these are hideous pre-apocalyptic blow up dolls that stand on the side of the road and are meant to attract customers. At the entrance of Rick‘s theme park, they simulate happiness, and at the same time they represent the inflated emptiness of the entertainment industry. Later on they become important tools in the fight against the monster, the colorful canary in the catastrophe mine.