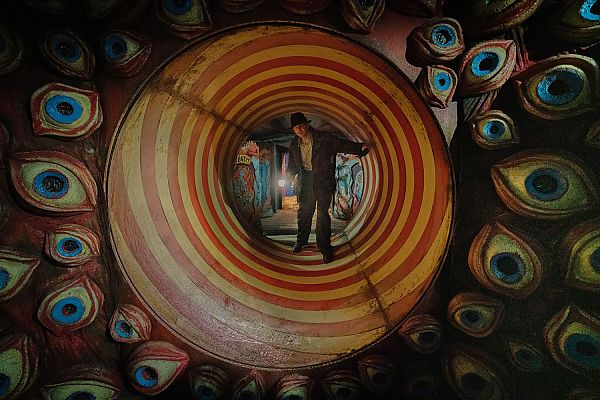 In del Toro‘s remake of the noir classic from 1947, Bradley Cooper plays prowler Carlisle who lands in a carnival as a temporary employee, quickly works his way up, and ultimately becomes a popular medium in high society.

The noir classic NIGHTMARE ALLEY from 1947 (D: Edmund Goulding) is the inspiration of Guillermo del Toro‘s most recent film. The material, with its nesting of real and psychological interior spaces, betrayal, self-deception, psychoanalysis and charlatanism was practically made for del Toro. The remake, which is quite true to the original, has Bradley Cooper play prowler Stan Carlisle who lands in a carnival as a temporary employee, quickly working his way up. Stan feels comfortable amongst the freaks, the small-time criminals and the homeless who don‘t ask him about his past. Fortune teller Zeena (Toni Collete) has especially charmed him as well as the complex system of secret codes that she has worked out with her partner Pete. After he learns it from her, he absconds with artist Molly (Rooney Mara). The couple rises to become a sophisticated show business act, but Stan wants more. His entrance to power and money will materialize through the scheming psychonalyst Dr. Lillith Ritter (Cate Blanchett), whose help and secret knowledge will aid him in becoming the darling of the city filled with rich neurotics. Within a short period, he becomes a popular psychic….

In his remake, del Toro gives the female characters, especially Cate Blanchett, more room and scales down the religious aspect: Carlisle doesn‘t rebel against God‘s commandments here, but rather the rules of the guild: “we give them a show. We don‘t deceive them.“ But del Toro primarily creates his own dark and colorful noir atmosphere in a loving ways. The lost souls go astray in his labyrinthian rooms and morbid details, while the thunder and rain never stops in the world outside.