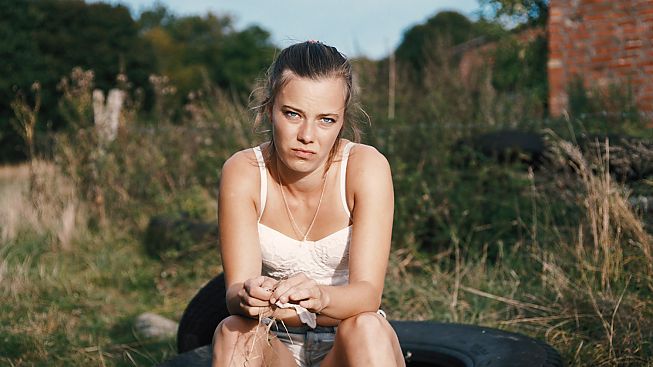 Niemand ist bei den Kälbern – No One's with the Calves

Brandenburg, summertime. Christin is having problems with settling for a life amongst cherry liquor and a cow barn.

There are different rules in the countryside, that much is certain. And not everyone is made for it. Christin (Saskia Rosendahl) is also having problems with settling for a life amongst cherry liquor and a cow barn. Especially because her relationship with her boyfriend Jan (Rick Okon) hasn‘t been what it once was for a long time. The two of them live together yet separately in his parent‘s farm in the Mecklenburg province and don‘t speak to each other. They‘re barely in their mid 20s, but not much more will happen if she doesn‘t get out now, at least that‘s what Christin thinks. Maybe the summer heat is making everything worse. Regardless, her encounter with older turbine engineer Klaus (Godehard Giese) from Hamburg shakes things up for her, and her yearning for freedom and love gets a jolt without Christin really being able to or wanting to change her situation. Director Sabrina Sarabi focuses the cleverly observed character study on the inability of her protagonist to break with the unwritten rules of rural life. Christin wants to leave, but is stagnant, she wants to be independent yet she can‘t let go because she is far too rooted in a world where gender roles are entrenched, every day is the same, and the animals (or is it the alcohol?) are her best friends. Saskia Rosendahl has this adult girl down pat. The defiance, the indifferent tone of a person who has missed out and the loneliness and brokenness of her character seeps from every pore. It is a big role in a small, but remarkable film which won the actress the Best Actress award in Locarno.