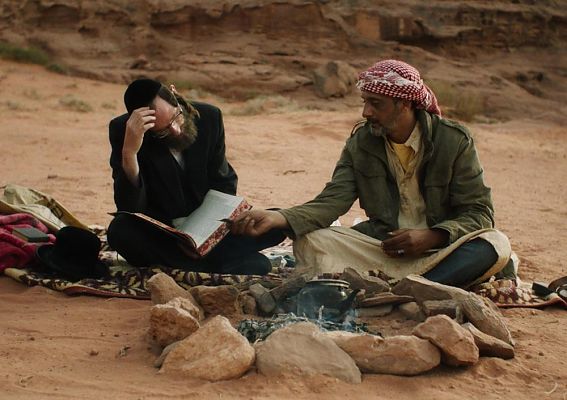 A chain of events takes New York Jew Ben to the Sinai desert, where Beduin Adel comes to his aid.

Anything is better than waiting for a matchmaker. When Ben (Luzer Twersky) lands in Jerusalem, he doesn‘t have to think long before his uncle offers him a job. He is meant to travel to Egypt to save the last Jewish community from extinction. But Jews aren‘t beloved in the predominantly Muslin country and so the bus journey ends prematurely in the middle of nowhere. The New Yorker struggles to cross the desert by foot and must reach his destination in four days when the Pesach festival begins. Then, Arab Adel, a Beduine looking for his camel, comes to his aid. It isn‘t just the religious difference that makes their journey a difficult endeavor.

The reverse exodus across the Sinai Desert to Alexandria is the hook of a charming story about friendship and overcoming religious borders. The film‘s journey was also difficult: Stefan Sarazin (NITSCHEWO) and Peter Keller won the LOLA for their screenplay in 2011. They took many detours to find financiers for their film and the perfect actors: Luzer Twersky lived in a strictly religious Hassidic community in New York until he realized his dream of becoming an actor. His counterpart, Heitham Omar, can most recently be seen in the award-winning drama BETHLEHEM directed by Yuval Adler. They are at the center of a smart reflection on what connects us as people. The filmmaker‘s perseverence was ultimately rewarded with the Producer‘s Prize at the Bavarian Film Awards this year. 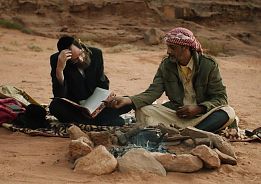 A chain of events takes New York Jew Ben to the Sinai desert, where Beduin Adel comes to his aid.