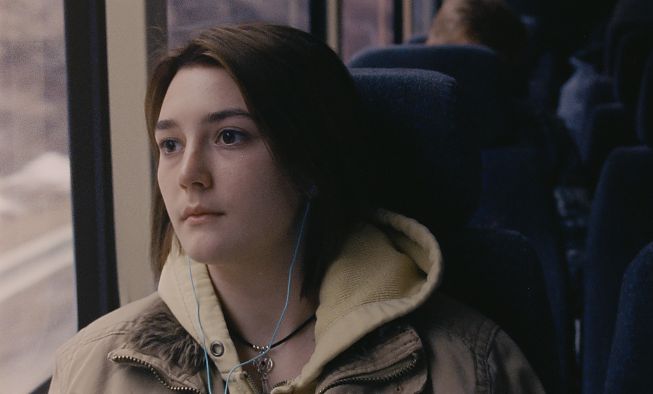 When 17-year-old Autumn from Pennsylvania finds out that she‘s pregnant, she only tells her cousin Skyler about it. With little money and the address of a clinic in her bag, the two make their way to New York City.

Never. Rarely. Sometimes. Always. 17 year old Autumn (Sydney Flanigan) is supposed to answer using these words as a councellor asks her very personal questions at a New York Planned Parenthood. Autumn came to the liberal big city from rural, religious Pennsylvania with her cousin Skylar (Talia Ryder) in order to have an abortion. “Do you use protection during sex?” “Has your partner balked at using a condom?” “Have you had sex without wanting to?” “Has someone ever hit you?” asks the councellor. Never. Rarely. Sometimes. Always. She keeps repeating the multiple choice answers while Autumn thinks about about the answers while getting more and more upset. You can tell on her face that this is the moment when she understands just how much violence is part of her normal everyday, how often “sometimes” or “always” are the right answers, and how wrong that is.

That is nearly all we know about the background of Autumn’s pregnancy. Some scenes in the beginning outline a family with many siblings and little care. A father who refuses to show understanding towards his older daughter who is obviously not doing well. “It’s all in her head.” A mother, who puts a jacket on her youngest child and then puts one on the father. A job at the supermarket, where inappropriate come ons are the order of the day. A school where someone calls her a “slut,” maybe because she’s a bit stranger than the rest, fits in less. We don’t really know, but it’s enough of an impression in order for us to guess why Autumn doesn’t want this child. When Autumn goes to her local family planning center, the councellor shows her an anti-abortion video and the gynecologist is gushing about the ultrasound. “This is the most beautiful sound that you will ever hear.” She won’t find any support here. Without much talking, her cousin Skylar does help her.

With a heavy suitcase and too little money, the two get on the bus to New York, where they will unexpectedly have to spend two nights. Eliza Hittman’s film mostly shows the time that the two young women have to kill, which is interrupted by the consultation at the abortion clinic. They sleep on benches, play in arcades, call the guy that hit on Skylar on the bus. They’re hungry and very, very tired. As Autumn gets paler and paler due to a lack of sleep and pain, Skylar keeps up the facade with occasional make up sessions in the bathroom. Nothing very bad happens to them, but some situations are pretty uncomfortable and many are intrusive. But the two friends always stick together.

Never. Rarely. Sometimes. Always. Eliza Hittman’s film, that won the Silver Bear at the Berlinale, isn’t just explicitly political because it shows an abortion as a matter of course at a time when the abortion laws in the US are vehemently contested and women’s rights are increasingly being impinged upon, but also because NEVER RARELY SOMETIMES ALWAYS taps into how far society really is when it comes to equality in every scene and every encounter. In what kind of a world do Autumn and Skylar assert themselves in? How often do they experience their boundaries being crossed in smaller and bigger ways? And what should the answer to these questions be? Never, rarely, sometimes, or always?