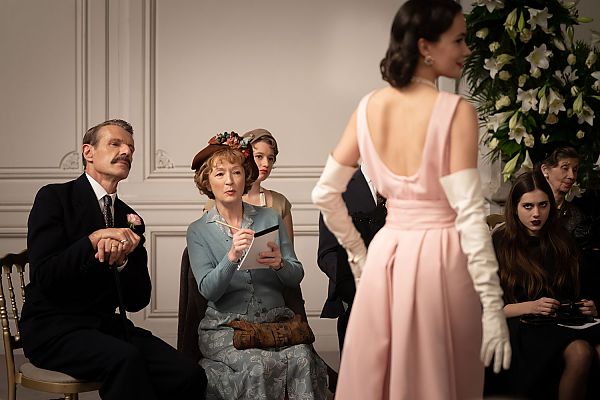 When Londoner Mrs. Harris, a cleaning woman, falls in love with the Dior ball gown of one of her clients and unexpectedly wins a nice amount on a bet, she dares to set a goal for herself. A fairy-tale, impractical luxury goal: a Dior dress.

MRS. HARRIS GOES TO PARIS is as sweet as sugar, like a cream puff with extra whipped cream and covered in chocolate, or better yet – it is about Paris and a certain je-ne-sais-quoi – an elegant tower of delicate profiteroles. Mrs. Harris (Lesley Manville) is a London cleaning woman whose husband is still labeled as missing a decade after the war. Her best friend is the helpful neighbor Vi, and there‘s Archie, who works in a dog racing betting shop, keeping her busy. So far, so okay, but when Mrs. Harris discovers a Dior ball gown at one of her client‘s homes, a pastel colored dream made of tulle and embroidery, and Archie wins a surprisingly decent amount while betting, she dares to set a goal. A magical, impractical luxury goal: a Dior dress. The way in which Mrs. Harris saves up every penny to make her dream come true is one of the most moving scenes in the film, yet she needs more luck until she can actually be on the plane to Paris. When she arrives there, she doesn‘t just encounter Madame Colbert (Isabelle Huppert), who wants to get rid of the simple woman, but she also realizes that she has to stay in Paris for an entire week for the tailoring which she doesn‘t have the money or time for. But everyone helps out: Vi and Archie in London, a viscount and accountant in Paris, and model Natascha who has a weakness for existential literature. Mrs. Harris casts a spell with her mixture of big dreams and quick-witted down-to-earthness. MRS. HARRIS is a colorful, nostalgic film fairy tale that isn‘t just set in the 1950s, but could‘ve also been made then too. Less refined than Dior‘s creations, but the film is so openly complaisant it is hard to resent it.