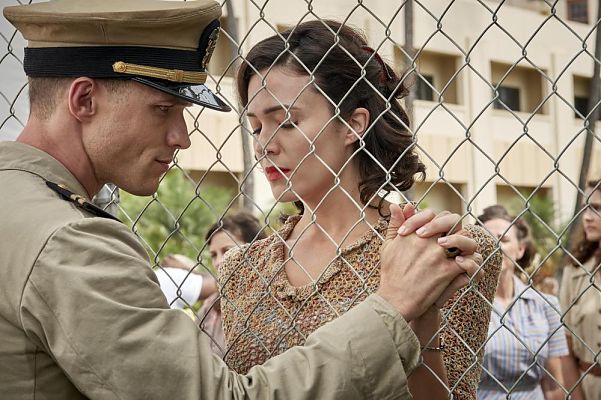 Roland Emmerich's MIDWAY feels like a throwback to a bygone era of moviemaking.

Recently, movies like HACKSAW RIDGE and DUNKIRK proved that the old war movie genre still has some life left in it, so long as you have a new story to tell or a unique way of telling it. Roland Emmerich’s MIDWAY, on the other hand, wants to dust off a very traditional war movie template and give it a big-budget special effects spit shine. So, while the movie is not a remake of the 1976 feature of the same name, it is very similar in spirit. This makes MIDWAY feel like a throwback to a bygone era of moviemaking that, as Michael Bay’s PEARL HARBOR proved back in 2001, few people are longing for.

In recounting the famous WWII battle that saw a significantly outnumbered US force defeat Japan’s mighty navy, MIDWAY is so devoted to old war movie tropes that it recreates all the bad parts along with the good. So we’re given another cookie-cutter love story that makes you wonder if there are any audience members left who won’t recognize this as a cheap and stale dramatic device. But perhaps more troubling is that the movie’s big morale-boosting speeches generate more shrugs than goosebumps.

Nevertheless, while there are few surprises and lots of groan-worthy dialog, Emmerich is nothing if not a consummate professional in dealing with the nuts and bolts of big spectacle action films like THE DAY AFTER TOMORROW and WHITE HOUSE DOWN. To the credit of Emmerich and his cinematographer, Robby Baumgartner (THE GUEST, BLAIR WITCH), every frame of MIDWAY looks fantastic. Many scenes radiate a golden Pacific glow, while the film’s countless aerial battle scenes are remarkably convincing.

Ultimately, these stunning aerial dogfights are the primary reason for why a new MIDWAY exists. So if you’re eager for another IMAX-worthy experience, this one may just deliver the goods.