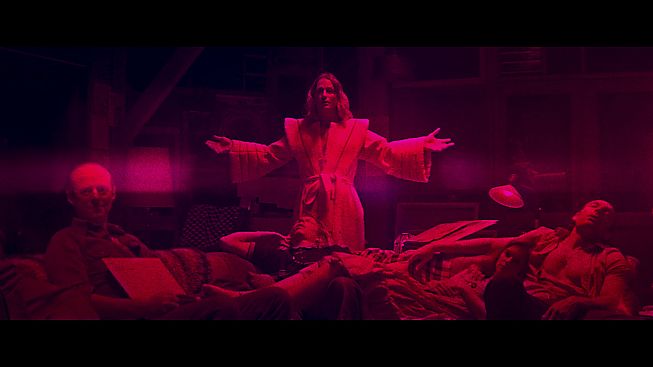 Nicholas Cage has become less of an actor and more of an internet meme in recent years. “Nicholas Cage losing his shit,“ a compilation video of Cage‘s outbursts, is one of the most popular videos on Youtube. Cage could look for a nice arthouse film with a dramatic plot about friendship and disability or do a remake of LEAVING LAS VEGAS to gain respect for his acting again, but he does the exact opposite with MANDY. Cage has never lost more of his nerves than here. He shakes and shivers with all of his body and twitches, screams, and cries while trying to drink a bottle of vodka in one go in a long scene in a psychedelic bathroom.. If you wanted to have a meme: here it is!

You couldn‘t have counted on MANDY. Director Panos Cosmatos debut BEYOND THE BLACK RAINBOW was a sensual, psychedelic retro sci fi dream with a chic analog synth score, but its narrative tempo was more like a lava lamp on valium. MANDY is a different animal even though it also begins in a somnambulant way. Lumberjack Red Miller (Cage) and his girlfriend Mandy Bloom (Andrea Riseborough) live in an isolated cabin in the woods in 1983. Mandy reads fantasy books and paints colorful metal fantasy illustrations, they watch trashy horror films on the couch together (NIGHTBEAST, 1982). Mandy, in her mid 30s, looks like she‘s been through a lot. She has an unexplained scar on her face, and it feels like the calm before the storm. Greg Lake from King Crimson sings “Sundown dazzling day/ Gold through my eyes/But my eyes turned within/Only see/Starless and bible black” in the beginning of the film and Jóhann Jóhannsons soundtrack feels like it belongs in an enchanted sanctuary. It would‘ve been nice to find out more about Mandy and her backstory as Riseborough imbues her with a magical kind of charisma. Then, the film completely changes and becomes a radical slasher trash homage. Mandy becomes the victim of a marauded jesus cult, their leader conjures up black motorcycle demons, Mandy is burned alive, and Red becomes a god of vengeance.

Cosmatos lets the visual fireworks explode with bizarre animations, billowing wafts of light, and demonstrative rear projections like in the Universal horror films of the 30s. Worlds morph and cave in until Red, the good old blood-drenched lumberjack, tries to start up the chainsaw. MANDY detaches itself as if the “Heavy Metal“ comic of the 70s had too much LSD and went crazy while listening to Emerson, Lake, and Palmer. The retro soundtrack consists of pompous retro prog rock and goth artifacts – but it‘s possible to enjoy it because it‘s thrown together in a hurricane of bloody nonsense with a lot of passion and humor.

Archvillain Jeremiah Sand (Linus Roache) makes Charles Manson look tame by comparison. Jeremiah Sand‘s horrid single “Amulet of the Weeeping Maze,“ a subterranean homage to the WICKER MAN soundtrack, and a crazy autobiography of the homicidal new jesus on bandcamp. Goodies for fans that will celebrate this amusing unholy blood mass for decades. In the US the distributorwanted to screen the strange film at only a few cinemas at first but had to change strategies because MANDY suddenly became a surprise hit. A new cult has been built around the “Cheese Goblin,“ a loving parody of a TV ad for kids from the 70s that plays in the background while the insanity is in full swing. At least only macaroni had to be sacrificed for it.