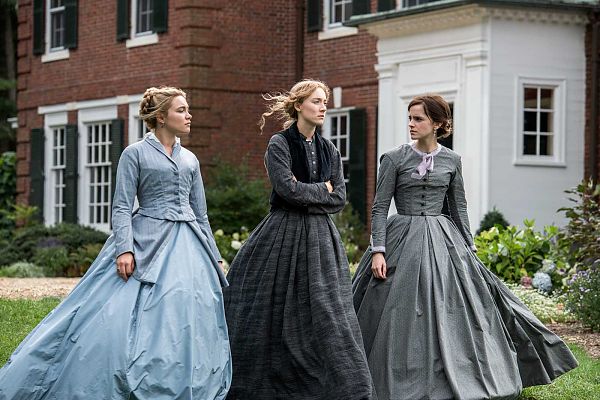 Greta Gerwig's adaptation of the 1868 novel by Louisa May Alcott. The four March sisters are moving from childhood to adulthood, briefly stuck in a transitory state as "little women".

It’s easy to roll your eyes when another film adaptation of a beloved nineteenth-century-book comes along. It can be even more tempting when that book is Louisa May Alcott’s Little Women, which gets a reliable update at least every generation. I liked Gillian Armstrong’s 1994 version, but I must admit that this new version, from writer-director Greta Gerwig, feels vital, alive and necessary in ways that I didn’t expect.

For those unfamiliar, LITTLE WOMEN tells the story of the March family, particularly the four sisters, Jo, Meg, Amy and Beth. The title is a phrase their father uses in the letters he sends home. For Mr. March is away, serving in the American Civil War as a medic for the Union army, leaving the sisters to be looked after by their mom and the family maid, but mostly each other.

Perhaps taking their lead from the absent Mr. March, who also serves as a pastor in their hometown of Concord, Massachusetts, the entire March family is always trying to do the right thing at any given moment. There are no villains in LITTLE WOMEN, just the ordinary hardships of getting by in life: to have your voice be heard, to find fulfilling work, to not be lonely, and to have the courage to help others when you can.

There is a lot to admire in Gerwig’s adaptation, starting with the way she’s chosen to structure her version of the book. In an interesting move that works in unexpectedly moving ways, Gerwig has chopped up the narrative so that the film is constantly moving back and forth in time. Far from being a disorienting choice, it tightens things up so that movie is constantly opening up new aspects of the story while resolving others. By continually looping forward and back again, Gerwig creates a chain of events that form a very strong narrative with powerful moments spread throughout.

What’s perhaps less surprising is that the acting is fantastic from everyone involved. The impressive cast is perhaps stronger than any other movie out right now, but especially outstanding is Saoirse Ronan as the tomboyish writer Jo, and Florence Pugh as Amy, who is also an aspiring artist and, like Jo, has to face the fact that women with career aspirations need to work twice as hard to be taken seriously.

The story has always had an uplifting feminist spirit to it, and while this can’t help but be accentuated at the start of 2020, Gerwig’s adaptation makes the message feel absolutely honest and essential. Yes, LITTLE WOMEN makes it clear that being a woman in a man’s world is an uphill battle, but it also makes the point that it’s okay to not want the same thing as your sister.

This LITTLE WOMEN feels radical. It's a movie free of judgement and full of love for all of its characters. At many points I was nearly overwhelmed by its full embrace of life in all of its burdens, tragedies, heartbreaks and joys. So not only is this version relevant, it feels bold and necessary, like much needed counter-programming to the many anxiety-inducing stories out there today.