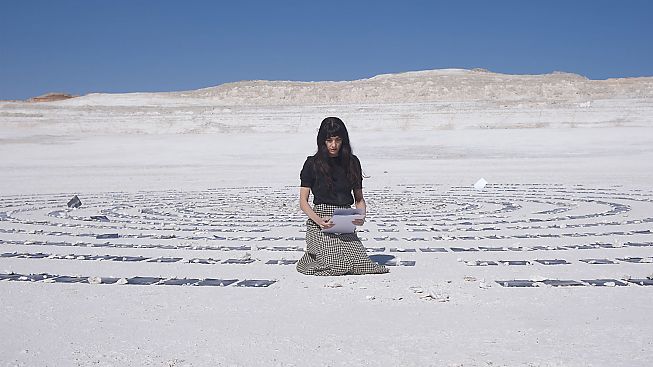 LAND OF DREAMS opens a portal to a poetic, desert in-between world, in which Iranian-American Simin works as a “dream catcher.“ On behalf of the census board, she asks people about their dreams. She herself doesn‘t really know why.

Iranian American Simin has a unique job: on behalf of the census board, she is a “dream catcher“ who asks people about their dreams. Why, she doesn‘t quite know herself, but she is fascinated by what people tell her. After the job is done, she becomes a shape-shifter, dresses up and tells the dreams in Farsi, her mother tongue, to the camera. A suitcase full of photographs is all she has to connect herself to her own past. Photography and film artist Shirin Nessat, who lives in California and migrated form Iran to the US at 17, processes her own tense relationship with her chosen home in the post-Trump era in LAND OF DREAMS. Based on a story by Nessat, her creative partner Shoja Azari developed the screenplay together with renowned French writer Jean-Claude Carrière, who passed away in 2021. The result is a wondrous mix of Iranian, European and US perspectives that is stylistically very close to the South American tradition of magical realism. The film opens a portal into a poetic, desert in-between world, in which the protagonist encounters different stations of American life, a curious foreigner in the country‘s living rooms. Simin visits rich white liberals and poor white racists, meets a Black painter who paints the nightmares of slavery on canvas, and is turned away at the door by a family of Native Americans. When she receives a special assignment from her office, it becomes visibly more difficult for her to orient and assert herself in this psychedelic world, in which dreams and fears seem to manifest.