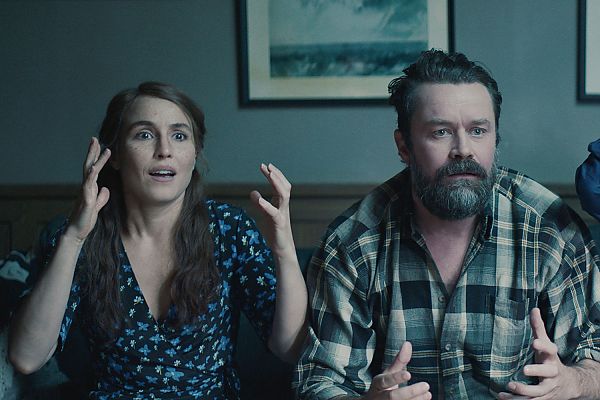 Ingvar and Maria adopt a very special lamb and treat it like their own child. Will nature take revenge? The rams seem enraged.

The wind howls and something is breathing heavily. Horses emerge from the winter fog, look at something and flee. Something invisible seems to have invaded the sheep pen. The radio invites you to a Christmas mass. A couple is lonely and sad in a house. A sheep is pregnant. That‘s the prologue of LAMB, Valdimar Jóhannsson‘s unconventional Icelandic folk horror film that received a lot of awards in genre film festivals last year but also won the award for originality in the “Un certain regard“ section at Cannes.

The couple, Marie (Noomi Rapace) and Ingvar (Hilmir Snær Guðnason), are Icelandic sheep herders that live on a remote farm. In a conversation about time travel, they dream of the past. They are clearly grieving over a loss. When one of their sheep gives birth to a very special lamb, they exchange meaningful, shocked looks, but soon Maria takes the creature in her arms and carries it home. They see “Ada“ as a gift, treat it as their own child and call themselves “mom“ and “dad.“ But Ada‘s real mother keeps calling for her lamb and disrupts the bizarre idyll, and when Ada gets older, Ingvar‘s brother appears and doesn‘t want to participate in this illusion of normalcy. Ada, walking upright in the meadow in a little coat, is an uncanny version of anthropomorphic fairy tale animals like Paddington or Disney characters and the humor of this isn‘t completely absent here. However, disaster looms in the background, mirrored in the ferocious eyes of enraged rams. Jóhannson implies Ada‘s supernatural origins from the beginning, but perversion is also lurking in the background. Those expecting a horror film with shock elements will be disappointed. LAMB prefers to persistently crawl under your skin. 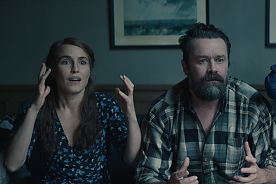 Ingvar and Maria adopt a very special lamb and treat it like their own child. Will nature take revenge? The rams seem enraged.