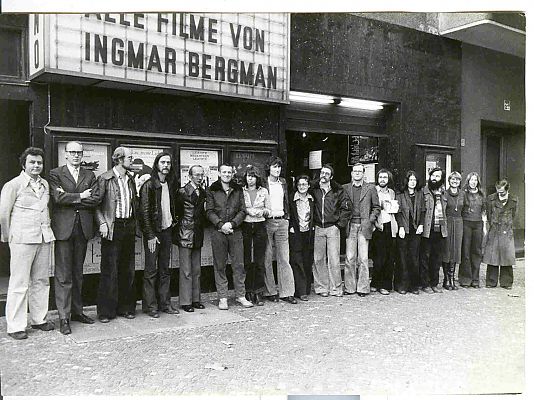 Ulrich and Erika Gregor met in 1957 and have led a life together dedicated to the cinema ever since. In 1963 they founded the “Freunde der deutschen Kinemathek“ who run Arsenal Kino in Berlin and started the “Internationale Forum des jungen ...

They are an institution in Berlin‘s Arsenal Kino and now they are at the center of a documentary: the Gregors, Ulrich and Erika, who met in 1957, married soon after, and have lived a life dedicated to cinema ever since. In 1963 they co-founded the “Freunde der deutschen Kinemathek“ who run Arsenal Kino in Berlin, but their most important initiative happened in 1971. The founding of the “Internationalen Forum des jungen Films“ that gave innovative directors a home. By now, the film world and also the Berlinale have changed. In the “big“ sections like the Competition, they show films that would‘ve only been shown in Forum in the past, but Forum has been its own brand for a long time.

No matter if you‘ve read Ulrich Gregor‘s “Geschichte des Films,“ enjoyed a comprehensive film education at Arsenal Kino or listened to conversations with international filmmakers after Forum screenings: it has always been interesting and informative to read or listen to the Gregors. Alice Agneskirchner‘s KOMM MIT MIR IN DAS CINEMA – DIE GREGORS is reliant on the charm and humor of the Gregors. Whether they‘re sitting in the cinema, sitting in their kitchen, or in front of the TV: the Gregor‘s like to tell stories – with a lot of details. This is why Alice Agneskirchner‘s documentary is somewhat arduous, considering that the run time of two and a half hours. Countless friends and companions get a chance to speak, but it is primarily the Gregors who do the talking. Their long, rich life is also part of the cultural history of the old federal republic. In the end, KOMM MIT MIR IN DAS CINEMA – DIE GREGORS is a worthy homage to two big cineastes.