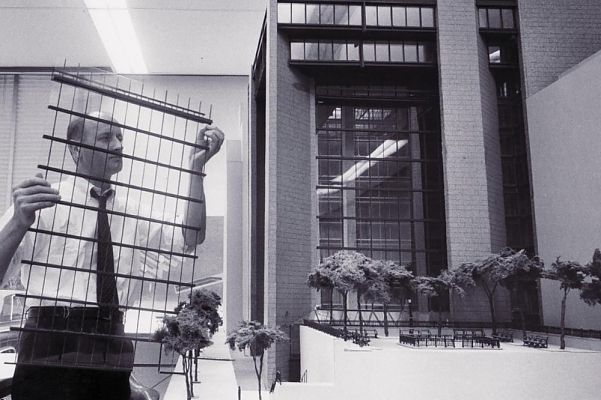 Kevin Roche‘s buildings convey an elegant functionality and spiritual serenity. That‘s mostly due to his meticulous, empathetic, and unpretentious way of working that puts a lot of value on practical details and the direct contact to future ...

The cliche of successful architects is that they are authoritarian eccentrics whose monumental buildings inscribe themselves in the city‘s silhouette – and that the inhabitants are either proud or annoyed by that. KEVIN ROCHE: THE QUIET ARCHITECT shows that a different approach to innovative construction is possible by focusing on a quiet great of 20th century architecture. Conversations with colleagues and the likable Kevin Roche himself paint a portrait of the stubborn student of Mies van der Rohe who influenced the architectural language in the late 20th century, especially in the US.

The impact of the brutalist architecture of the 1970s or the playful postmodern aesthetic of the 1980s are difficult to relate to today. Roche‘s buildings have an elegant functionality and spiritual peace that one could describe as timeless. That‘s mostly due to his meticulous, empathetic, and unpretentious way of working that puts a lot of value in practical details and having direct contact to the future residents. In some moments of THE QUIET ARCHITECT, the second film of director and former architecture student Mark Noonan, you wish there was more time to capture and explore Roche‘s structures. Instead, the film gives more space for general observations about the role of architecture in relation to its players – architects, clients, and residents. These excursions are enriching and make one aware of the simple, often overlooked fact that is the underlying concept of Kevin Roche‘s life‘s work: architecture is not just for the financial and intellectual elite, it defines the living environment of every person.