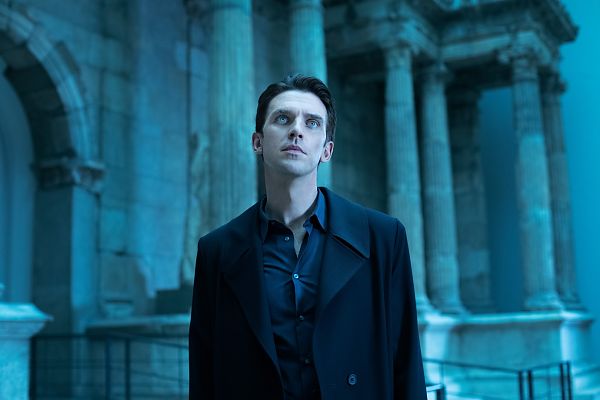 Historian Alma is meant to spend three weeks with a robot who has been programmed to be her ideal partner using statistical data from millions of women and Alma‘s personal “mindfiles.“

Humanoid robots have belonged to the film canon from the time of Fritz Lang‘s METROPOLIS at the latest. While they were seen as threatening for a long time, always about to infiltrate humanity and wanting to rule the world, there have recently been more and more films that approach the topic in a more gentle, commonplace way. There was Spike Jonze‘s light pink elegy HER, for example, in which Joaquin Phoenix falls in love with Scarlett Johansson‘s voice who is the virtual assistant of his computer operating system. The Swedish show “Real Humans“ has androids of varying complexity who are integrated into daily life as domestic helpers and lovers. While people depend on them more and more, some individual “Hubots“ begin to separate from their inventors and stand on their own two feet.

Maria Schrader is also primarily interested in the subtle changes of everyday life caused by the presence of AI. In a future that looks exactly like present-day relationship dramas, historian Alma (Maren Eggert) is meant to test out three weeks with robot Tom (fantastic humanoid Dan Stevens), who has been progammed to be Alma‘s ideal partner with the help of the statistical data of millions of women and Alma‘s personal “mind files.“ Her report will help the ethics commission in deciding whether partnerships between humans and robots should be allowed in the future.

The first encounter between Alma and Tom in a bar doesn‘t go smashingly. Alma is a rather cold, very smart, career-driven woman and Tom‘s flirty lines like “your eyes are like two mountain lakes“ leave her underwhelmed. But Tom is a quick learner. He learns that it‘s better to leave Alma‘s chaos unchanged, to avoid phrases like “alrighty then,“ and also to disagree with her and be inaccessible at times. They even develop some funny banter. The more Tom learns, the harder it is for Alma to keep her distance and regard the handsome man not as a peer but as a machine.

Maria Schrader sets up Alma‘s unease, chiefly due to the fact that Tom looks so much like a human and visibly reacts like an individual, in a calm and laconic way. “When I talk to you, I‘m actually talking to myself,“ says Alma. Paradoxically, she‘s telling him that. Alma diagnoses that it gets harder for people to deal with others once they‘ve gotten used to the tailored algorithms and finds it hard to let go of him. By doing this, Schrade creates a discomfort that seems less connected to a fantastical future and has more to do with a present in which communication is continuously and largely unnoticeably “optimized“ by AI. The difference between what is “real“ and what is an algorithm is becoming harder and harder to distinguish between. She does sometimes fall into an old binary narrative pattern with clear opposites by doing so - soul vs no soul – that calls for a decision between human and machine.