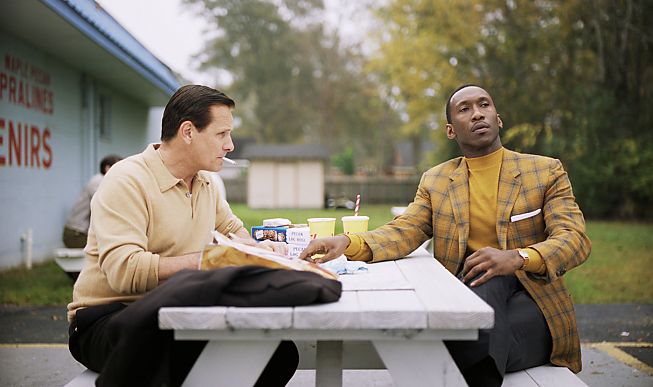 In 1962 African-American pianist Dr. Don Shirley needs a driver to accompany him on a risky tour in the South and hires Italian-American bouncer Tony Lip for the job.

The two unlikely friends from GREEN BOOK really existed. In 1962 famous African-American classical pianist Dr. Don Shirley needed a driver and bodyguard to accompany him on his risky tour in the South which still had segregation laws. He hired bouncer Frank Anthony Vallelonga from the Bronx, who was also called “Tony Lip“ because of his fast mouth. A life-long friendship between the two men developed. The “green book“ also existed: it was the travel guide for the “Negro Motorist“ that listed safe locales and hotels in the South. Peter Farrelly (THERE‘S SOMETHING ABOUT MARY) has made a friendly, colorful, and confident buddy movie out of the story. Viggo Mortensen inhabits the role of the big mouthed but good-hearted Tony who isn‘t averse to small transgressions but kindly declines when the “family“ has great “jobs“ for him with gusto. Like all the men in his clan Tony is certainly a racist – after two black workers were at the house, he throws the glasses they drank from in the trash (his wife Dolores takes them out again). But on the trip he sees up close how his boss, who he thinks is a dope at first, has to deal with daily discriminations and sides with him.

GREEN BOOK isn‘t an anti-racist milestone, especially because Farrelly focuses entirely on Tony‘s perspective. Tony has the best jokes, Tony is likable from the start (despite the racism), when they‘re in a pinch he gets them out, and in the end Tony teaches Doc, which is what he calls Don Shirley, how to view life in a jazzier way. Mahershala Ali gives an impressive performance, but the screenplay was mostly written for Tony – yet it‘s Don Shirley‘s unfinished sketched out figure who is more memorable.