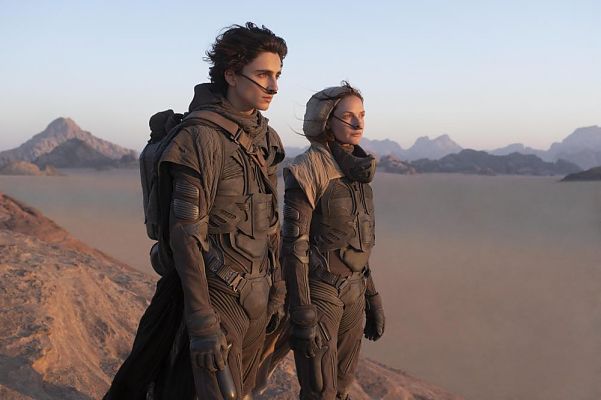 Long-awaited film version of Frank Herbert's scifi-epic. Political intrigue and giant sandworms on the desert planet Arrakis. Young Paul Atreides has to face up to his destiny.

“Feel the wrath of my bombast!” – The Fall

DUNE is probably the last big boomer franchise, after STAR WARS with its zen connections and muppets, the “Lord of the Rings“ that glamorized ethno pluralism, and the Marvel and DC universes that only occasionally attempt to let go of the dustier elements of the spirit of the 60s. Frank Herbert‘s “Dune“ was the success of the new hippie esoterics in the mid 60s that dreamt of a new, mystical age of cosmic consciousness. Cosmic consciousness is a matter of science, technology, ethics, and ecology than one for stoners these days. But no matter: hundreds of millions of dollars will probably be invested in DUNE in the next 10, 20 years, seeing as Denis Villeneuve‘s film ($180.000.000) only covers the first half of the first novel in the cycle. Herbert wrote six in the series, and there are also two posthumous prequels. There‘s at least as much material as the amount of the wonder drug “Spice“ found on the desert planet.

DUNE will probably be a big success. You can see the money in every shot of Villeneuve‘s film. The CGI effects are bombastic and so cutting edge that the the effects will seem current for at least the next few years. The high tech retro design orients itself on Ferdinand Porsche rather than on Star Wars: chic ovals, stream-lined shapes. The dragonfly-like airplanes will soon be seen in sandboxes as toys. Even the cumbersome, tough, endlessly stretched out plot filled with inner monologues in the novel has been tightened, with supporting characters being summoned like ghosts and disappearing shortly after making their first appearance. Villeneuve‘s DUNE looks fantastic and is less boring than the book, the Hans Zimmer soundtrack drones on effectively, the cast is filled with stars whose main job it is to look serious and tense. Everyone does that well. The handsome pre-Raphaelite star Timothée Chalamet is the protagonist, the reluctant future savior Paul Atreides.

Herbert‘s novel was understood to be a criticism of hero myths and teleological religions. Herbert was influenced by zen philosophy and Sufism and part of “New Age“ mysticism that countered traditional religious dogmas. It is doubtful whether this way of thinking can also answer contemporary questions. There may be a backlash against DUNE in Muslim countries and post-colonial leftists. Herbert quotes cultures as if he is floating above history. Denis Villeneuve takes all of this very, very seriously, unlike David Lynch‘s grotesque steampunk version. There‘s not a hint of humor, no cuteness, no sex in the first part. Nothing to distract from the impact of the landscapes, the military formations of different dynasties, the retrofuturist design. The first part of the franchise is nothing more than a two and a half hour long exposition preparing for Paul‘s ascent. Escape is pointless, almost no one will escape the desert planet over the next decades.