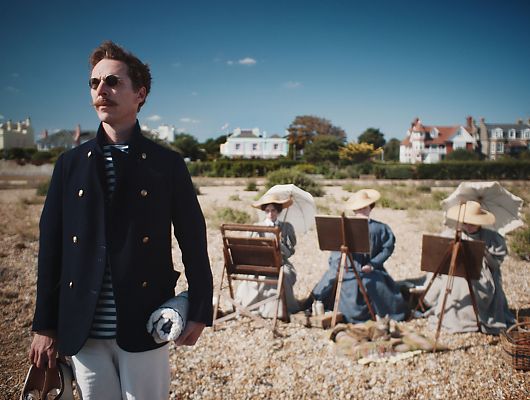 The Electrical Life Of Louis Wain

Cat painter Louis Wain (Benedict Cumberbatch) has a lot of talent and just as many quirks. He sees electric voltage in all living things. Images vibrate and shimmer on the canvas in this tragicomedy.

Louis Wain (Benedict Cumberbatch) is a funny oddball. He is very talented at faithful paintings of people and animals from memory and he also writes operas and goes boxing after – which he does poorly – but when it comes to social interactions, he‘s a lost cause. However, this is crucial at turn of the century Victorian London and when he falls head over heels for the governess of the house, Emily Richardson (Claire Foy), his five sisters have misgivings and the eldest Caroline (Andrea Riseborough) completely dismisses it. Against all odds, Emily and Louis marry and his paintings of cats keep them afloat. Unfortunately, there is no happy ending.

The life of Louis Wain is the stuff of tragicomedy par excellence. Wain was one of Britain‘s most popular painters in his era, but he didn‘t get rich from it. He was mentally distressed and died alone in a mental asylum. Director Will Sharpe allows us to view the world from his eyes. The images vibrate, electrical voltage, which Wain discovers in all living things, whir him the classic 4:3 format on screen, which Benedict Cumberbatch enthusiastically brings to life. Even if it‘s sometimes reminiscent of his roles as Sherlock Holmes and Doctor Strange, his quirks here are more than a version of the tortured genius. Claire Foy complements his acting in a wonderful way. The electrical tension between them is palpable. In saturated colors, Sharpe has created a unique film reminiscent of the expressionist early days of cinema. It is a tragic comedy of life that incites ones to laugh and cry in equal measure.