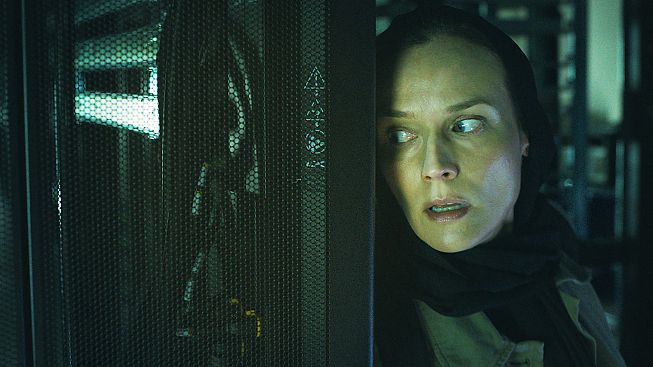 One day Rachel, a missing spy for the Mossad, reports back. A story of a woman who was deployed in increasingly more reckless ways for unknown purposes unfolds in her supervisor‘s report to his superior.

Rachel reports back by telling Thomas that her father has died. It‘s not the first time he has died. “My father is dead“ is the signal with which Rachel wanted to abort her mission in Iran when she was still a Mossad agent and Thomas was her contact. He recruited the young rootless woman and accompanied her on increasingly more intense missions until she went off the radar in a long-term mission. Her last mission was to involve an Iranian electronic businessman in a nuclear technology deal. The fact that she and Farhad had a relationship is something the Mossad only finds out after her disappearance. Rachel (Diane Kruger) only wants to tell Thomas (Martin Freeman) about the reasons for her return. In his report to his bosses a story develops about a woman deployed in increasingly more reckless ways for reasons unknown to her...

THE OPERATIVE is a spy film in the tradition of TINKER TAILOR SOLDIER SPY: gunfights, chases, and nerve-wracking undercover adventures are the exception. Most of Rachel‘s work consists of pretending to have as normal a life as possible and having conversations with Thomas and his bosses in inconspicuous apartments. The seeming calm is in extreme contrast with the jumble of lies and deceit among the characters. Rachel isn‘t honest to them in an attempt to gain a modicum of control in a game where she is not much more than a pawn. The Mossad cares as little about her as the dead Iranians which the German-Israeli-French production depicts as being sympathetic and sincere. Spying is a confusing and dirty game for all involved and one you can‘t easily leave.