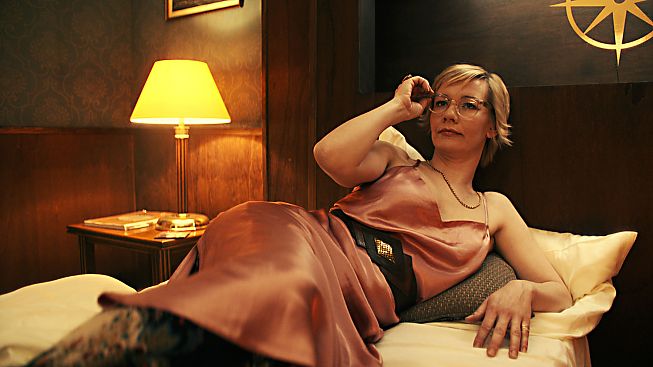 Forger Vincent and the somewhat naive Nils steal Malewitsch‘s “The Black Square“ and flee on a cruise ship. A surreal ensemble crime film with a touch of Wes Anderson.

Kasimir Malewitsch‘s painting “The Black Square“ shows exactly what‘s in the title: a black square. Doing away with representational art was a sensation, if not a revolution, in 1915. Those expecting an art history doc, however, are barking up the wrong tree. Director Peter Meister sends two semi-professional art thieves off in his feature length debut. In the comedy, forger Vincent and the somewhat naive Nils steal “The Black Square“ and flee on a cruise ship. But the two of them aren‘t the only ones on board interested in the artwork. Soon the painting is gone and the forgery that Vincent made passes from hand to hand. Besides art agent Martha who wants to give the painting to a rich Russian, the police, a greedy gigolo, and even the ship manager are hunting the painting down. This leads to many complications, confusions, and several seductions.

Peter Meister combines the surreal atmosphere of a Wes Anderson film in the ensemble crime movie. The outdated pomp of the ship, the colours, the costumes. When it comes to art‘s overriding question about originality – Malewitsch himself made a few copies of the painting. This is works and the great cast with Sandra Hüller as Martha, Bernhard Schütz as Vincent and Jacob Matschenz as Nils is fun. When the hardened forger becomes a vulnerable artist, cultivated Martha mutates into an ice-cold professional assassin and insecure Nils finds himself as an Elvis imitator, the game sparks with comedy. Unfortunately, the plot gets lose in the cascade of lunacy, dirty jokes and quick gags. A bit less of that would‘ve helped. As Malewitsch already showed, sometimes art has to focus on what‘s most essential.