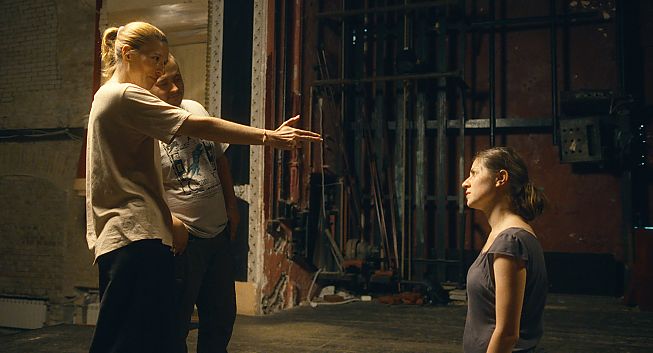 When the war broke out in eastern Ukraine in 2014, five actors had to make a decision: Fight or not? Stay or flee? The film documents rehearsals for a play based on their reflections on that decision.

The documentary DAS HAMLET SYNDROM shows theater rehearsals in which actors develop the piece together. Unlike Hamlet with his “to be or not to be?“ monologue, they look back on the consequences of the decisions that they themselves have made. When war broke out in eastern Ukraine in 2014, five actors had to decide: Fight or not? Stay or flee? Oxana went to demonstrations in Maidan and processed political topics with her art. Rodion sewed military uniforms. Slavik, Roman and Katya went to the frontlines and came back traumatized. When they try to communicate and process their experiences in the rehearsals, they often reach their tipping points or get in conflicts with each other and the rehearsals often have to stop. They talk about experiences with death, but also how the war experience has changed their relationship to their home country is discussed, the special challenges for female fighters and whether the Ukrainian LGBTQ community was discriminated in peaceful times but instrumentalized for political purposes in the war.

Elvira Nieviera & Piotr Rosolovski follow the actors outside of the rehearsal room and show their families and social environment and interweave it in way that is clearly inspired by the theater of Heiner Müller. As a portrait fo a Ukrainian generation born after the fall of the Soviet Union and who find themselves in the next war since the end of filming, the film leaves a strong impression despite its fragmentary nature and inner contradictions.