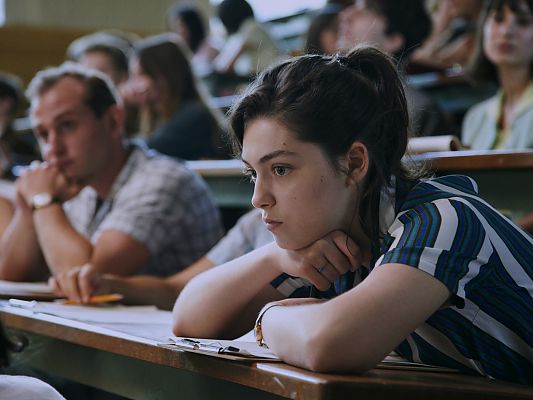 France in the 1960s. Anne is in her early 20s, a gifted student who is working towards becoming a teacher. But then she gets unexpectedly pregnant and all of the doors that were open to her are now closing.

Anne knows what she wants. It is not a child. And that‘s her problem. She is in her early 20s and is gifted student who is working towards becoming a teacher. Maybe even more than that. But then she gets unexpectedly pregnant and all of the doors that were open to her are now closing. The setting of HAPPENING is France in the early 60s, when abortion was illegal there as well. The doctor who gives her the news is sorry. Genuinely. He knows what the young woman will now have to face. He just can‘t help her without breaking the law. In the following weeks, in which we accompany Anne at every turn, as she fights using every imaginable method. Against her fate. Against the system. Against herself. Actress Anamaria Vartolomei imbues her with the necessary persistence, two big eyes filled with fear and an iron will. But time is running out. In the almost square mages, shot in a compressed 4:3 format, Anne‘s options gradually dwindle. Her options disappear, but the distress gets bigger Her body is growing. Her loneliness is as well. HAPPENING, based on the eponymous book by Annie Ernaus, is an almost imperceptibly upsetting film which is as impactful as it is due the personal experience of the author and also profits from the refined filming which French director and screenwriter Audrey Diwan. Diwan also her own experience with the topic and makes sure that every step, every breath, every emotion her protagonist experiences is tangible. Whether it‘s head-on, from the side, or the back, Laurent Tangy‘s camera always has an eye on Anne. And just like Anne, she doesn‘t look away when things are difficult or painful. Especially not then. HAPPENING is a film that‘s as close to real life as cinema can be. With every take, every image. In every fleeting moment.