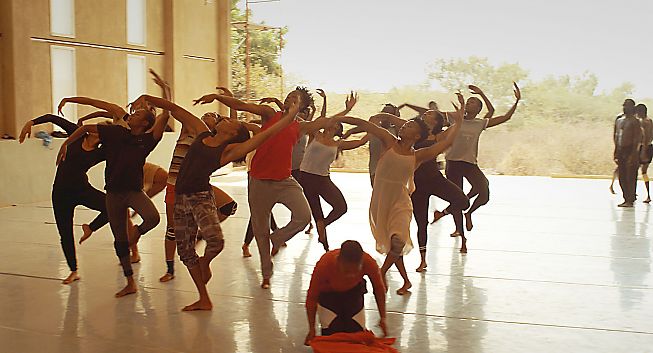 The Wuppertal dance theater is trying to keep the work of legendary choreographer Pina Bausch alive after her death and gain a new audience for her pieces by performing new stagings with other companies, among other things.

Theater and music pieces are often performed and reinterpreted in new contexts centuries after they were made. Dance performances, however, seem to be doomed to be forgotten once the original ensemble ages. The Wuppertal dance theater is trying a new approach after the death of legendary choreographer Pina Bausch and gain a new audience for her pieces by performing new stagings with other companies, among other things. DANCING PINA accompanies the rehearsals of “Iphigenie auf Tauris“ at the Dresden Semperoper and of Stravinsky‘s “Rite of Spring“ at the École des Sables in Sénégal. In Dresden it‘s a classic ballet company, in Dakar it‘s an ensemble made up of different African countries influenced by street dance and traditional African dances. Under the direction of the star dancers of the original choreography, it is about preserving the essence that made these pieces world famous, the deep human honesty, the search for highly personal answers to fundamental questions, while toeing the line between faithfulness to the original and artistic freedom. This is uncharted territory in the rehearsal rooms, in Germany as well as in Africa. Those classically trained in ballet are not used to tolerating mistakes and supposed imperfections, it‘s great to see how they start to enjoy the freedom of Pina Bausch‘s world. In Africa, the themes are different, but there is still the same amount of pressure. Especially for women, the decision for a life of professional dance often means a break with familial and social expectations. But there are also astounding similarities. The trust in one‘s own personality as the core of the performance, which is characteristic of Pina Bausch‘s approach, still has innovative force.