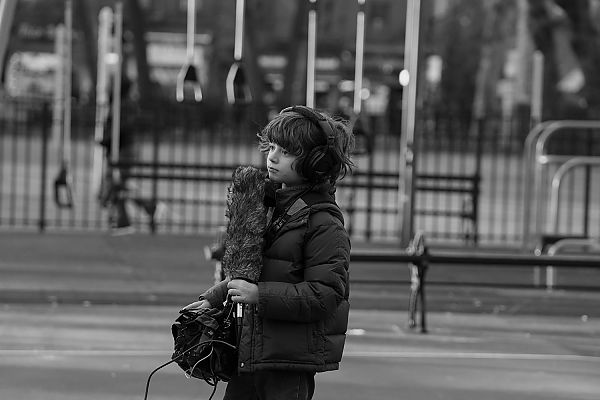 Radio journalist Johnny (Joaquin Phoenix) interviews children in different cities about their plans, worries, and also, what makes them happy. When his sister Vivien has to take care of her mentally distressed ex-husband, Johnny takes Vivien‘s ...

Mike Mills‘ C‘MON C‘MON is luckily very different from the Disney family stories where problems only exist to be solved and crises only pop up in order to overcome them and grow from them. In this film, it‘s not about fulfilling your dream by believing in it, but about getting by somehow – and also about finding enjoyment when the situation is complicated.

Radio journalist Johnny (Joaquin Phoenix) interviews children in different cities and life situations, asking them about their plans, worries and what makes them happy. When his sister Vivien (Gaby Hoffmann) has to take care of her mentally distressed ex-husband, Johnny it put in charge of Vivien‘s nine year old son Jesse (Woody Norman). Jesse barely knows his uncle, but the first connection happens via Johnny‘s recording device. With a microphone and headphones, Jesse records the sounds of the LA beach, and later on, when Johnny has to travel, he explores the big city sounds of New York and New Orleans. Johnny has no experience with having a bright but distraught young boy with him day and night. Jesse rattles on non-stop, has thousands of theories, and is hard to fool. His questions his sore spots. Johnny asks himself how his sister can put up with it all the time and how someone can still manage to work: “you get used to it,“ she says on the phone. Johnny and Jesse gradually find an open way to deal with each other that isn‘t limited to the exciting moments of big city discoveries.

C‘MON C‘MON has less of a plot, the film depicts a development. Mills films in chronological order, so that the connection between Jesse and Johnny occurs at the same time as what the actors experienced. The film interweaves documentary interviews with children that were really done by the actors at the beginning of each filming day. In conversations, scenes from the past suddenly appear, which could be both flashbacks for the characters as well as revelations for the audience: it happened in the past and is important for the present. The titles of the books that Johnny reads to Jesse or uses to orient himself seem like a reading list. It almost feels like an essay film, but like Paul Thomas Anderson‘s recent LICORICE PIZZA, C‘MON C‘MON has a loose structure. It‘s more about a snapshot or a specific time frame from the past. When Jesse returns to his mother, the film is over. Something has changed, but it isn‘t goal-oriented like in classic Hollywood dramaturgy.

C‘MON C‘MON is so funny and moving, so loose and masterful, that it‘s easy to overlook that Mills has also presented a cinematic (life) philosophy that emanates from the simple function of the film: experience, discovery and the difference between memory and technical recordings, which the earliest film theorists had already thought about. 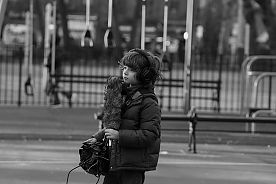 Radio journalist Johnny (Joaquin Phoenix) interviews children in different cities about their plans, worries, and also, what makes them happy. When his sister Vivien has to take care of her mentally distressed ex-husband, Johnny takes Vivien‘s ...