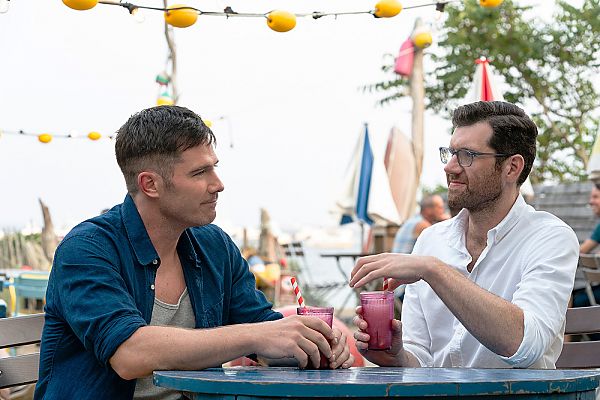 “Love is not Love“ is the motto of Bobby, played by the screenwriter and protagonist of BROS, comedian Billy Eichner. The gay podcaster, winner of the “cis white gay person of the year“ Awards and the founder of the New York LGBTQ+ Museum, resists the appropriation of queer love into the heteronormative mainstream and vehemently insists on his happily single status – even if most of his online hookups don‘t go far beyond “what‘s up?“ as far as conversation goes. When he meets the hyper-buff notary public Aaron (Luke Macfarlane) at a club night, he is suspicious. Luckily, Aaron isn‘t looking for a relationship either. BROS has everything that makes up a good rom-com. A lovable pair that really don‘t seem to suit each other at first sight but develop real chemistry and their own language, a real conflict that allows you cheer for them, and of course funny dialogue, situational comedy, and pacing, pacing, pacing. The scripted humor mostly comes from Bobby/Eichner who can‘t let anything go without commenting on it and rambles on to his own detriment. What‘s great to see is how Aaron can collapse his whole word souffle with his calm nature and a mischievous look. And then there‘s also the diverse and pugnacious board association of the LGBTQ+ Museum and the question of what should go in the last exhibition space? An absolutely brilliant screenplay (Oscars 2023?) holds the storylines and ideas together and manages to show that love is, of course, love, but, on the other hand, it also isn‘t. Or, as the opinionated Bobby, of all people, says: “we need to be more fluid.“ 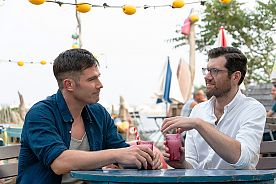