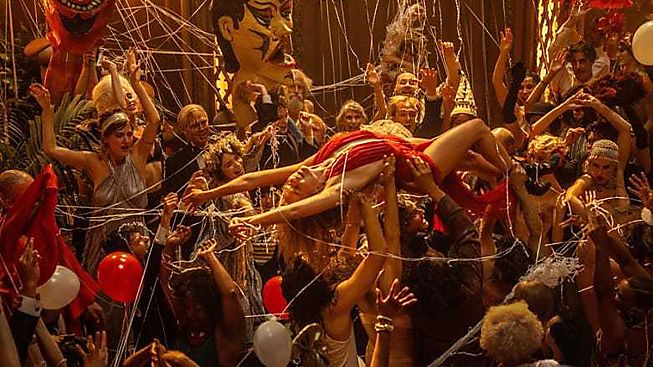 Period comedy/drama about a number of people caught in the chaos of Hollywood moving from silent to sound film. Some rise, some fall but most of them party.

An elephant shits on camera. Margot Robbie pukes on a carpet, at the feet of Hollywood bigwigs. Damien Chazelle does not scrimp on drastic scenes, bodily fluids, and excrement. Yet certain elements from the template – Kenneth Anger‘s gossipy scandal book “Hollywood Babylon“ (1965), which Anger himself said was researched with the use of “telepathy“ - are definitely sanitized. In one scene a young woman dies of a cocaine overdose while having sex with the fat comic Fatty Arbuckle. In reality, in 1922 Arbuckle raped actress Virginia Rappe so brutally that she died of a burst bladder. Chazelle‘s sex scenes remain harmless, probably because of the international censorship practices. But there are drugs, alcohol, parties, nervous breakdowns, and deaths – and digressions about the “magic“ of film that are some of BABYLON‘s best scenes.

Chazelle films the late years of early Hollywood as a cutthroat chaos machine as it transitions from silent films to talkies between 1921 and 1922. After a roaring orgy, the film shifts focus to three characters: young Manni Torres (Diego Calva), who starts as a kind of production assistant and produces the first jazz films as a director in a small studio – which is not entirely historically correct. The first jazz films with Black musicians (ST. LOUIS BLUES with Bessie Smith and BLACK AND TAN FANTASY with Duke Ellington) were made in 1929. But Chazelle clearly didn‘t want to make a historical film, which becomes clear with his second character. Margot Robbie plays a young actress whose story is inspired by the “It Girl“ and flapper idol Clara Bow. Robbie‘s character Nellie LeRoy seems to be from another era. Her hairstyle and mannerisms are reminiscent of Kim Basinger in 9 ½ WEEKS, her outfits are like those in the strip shows on early cable TV. The third character is silent film star Jack Conrad, which Brad Pitt plays with focused understatement. During the first hour of this almost three hour movie the film seems to only have three modes: loud, drunk and coked up chaos, short dialogues, and ultra-short scenes where the products of this chaos can be seen: beautiful silent film scenes with perfect lighting. The bright California light which was used in the silent era in order to shoot films outside, seems like the summer sun on a hungover Sunday in the “real scenes.“ But it creates fantastic stilent film images. One scene: Brad Pitt‘s film star is completely drunk and can‘t stay on his feet for a love scene. But after this comic scene of the shoot, Chazelle shows how the silent film camera saw the scene: without any audio, perfectly lit, and precisely framed. The short moment is breath-takingly beautiful. Margot Robbie‘s Nellie seems permanently antsy but she can cry on command, which she explains using Clara Bow‘s words “I just think of home.“ Her tears seem like a gimmick in the shoot, but in the short black and white silent film scene, which Chazelle shows after, lit as if it was done by Joseph von Sternberg, the tears appear staggeringly beautiful.

BABYLON has little to do with Kenneth Anger‘s message, which chiefly wanted to show the Hollywood moral watchdogs as ethically degenerate hypocrites. Chazelle is clearly uninterested in the conflict. Chazelle‘s film is about the end of a party, the loss of uncontrolled creativity, the vengeance of reality. Perhaps this is why BABYLON isn‘t a historical film, maybe this is why Margot Robbie has to keep putting her arms up and scream out the “Millenial-Whoop“ which can be heard in James Cameron‘s new AVATAR film during ever flight scene. The end of the party is now and yet the film ends with a dazzling montage of film scenes from Bunuel‘s L‘AGE D‘OR to, well, AVATAR. There is hope, even if it‘s only in film. 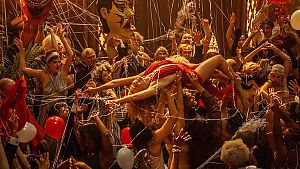 Period comedy/drama about a number of people caught in the chaos of Hollywood moving from silent to sound film. Some rise, some fall but most of them party.