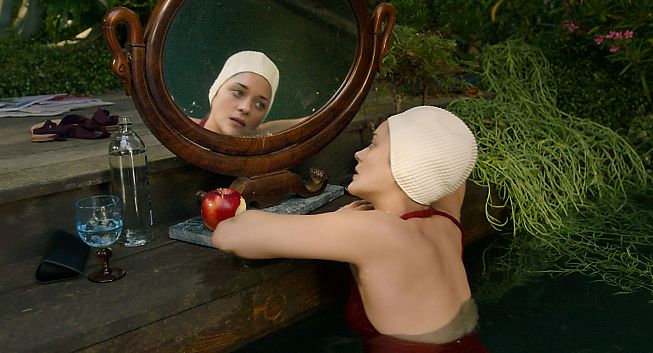 At its root a very current version of A STAR IS BORN, the collaboration between Leos Carax and the Mael brothers Ron and Russel of the band Sparks is filled to the brim with visual and musical ideas.

ANNETTE, the collaboration between Carax and the Mael brothers Ron and Russel from the band Sparks, is filled to the brim with visual and musical ideas. All expectations of a naturalist story go out the window at the start of the film when audiences are informed that talking, eating and breathing are prohibited during the film. Then Carax sits in a recording studio as a producer in order to record “So May We Start.“ What begins as the staging of a recording session becomes a big choir number with the ensemble walking down the streets and promising a screening with a stage that‘s either outside or in.

The story that the film tells has several frames of reference, but the mechanisms of the cultural industry and its narratives are a constant. ANNETTE is an unforgiving variation of A STAR IS BORN but as a subversive pop opera and is exactly the film that the world needs now: a farewell to the cult of heroism and celebrity. Successful stand-up comedian Henry McHenry (Adam Driver) and successful opera singer Anne Defrasnoux (Marion Cottilard) have fallen in love and are expecting a child, whereupon the comedian drinks more and sees his career go downhil. This part of the story was filmed four times since 1932 as A STAR IS BORN, twice by George Czukor, whose films are the most important visual reference points of ANNETTE, including the coloring. All of the early films ended with the death of men who released the energies of the women, and in the films from 1937 and 1954, and in a certain respect also the 2018 version with Lady Gaga and Bradley Cooper, were set up as love sacrifices. Sparks have clearly had enough of that. Czukor‘s version with Judy Garland had depressive gothic features, and in ANNETTE Adam Driver is actually being chased by ghosts. The comedian‘s narcissism doesn‘t have any positive aspects any more. In his comedy routine, which is accompanied by laughter but is deeply unfunny in every way, the humor is replaced by laugh samples and the ha ha ha is replaced by background singers. His love always has threatening undertones: “you die so beautifully,“ he says to Anne, who falls to her death every day on the opera stage – and that is also a commentary on the love sacrifice myth.

Those expecting a feelgood musical with lovable characters and a proper plot will probably be disappointed. Unlike LA LA LAND, where the darker aspects only revealed themselves in hinsight, ANNETTE is predominantly weird and dark and tells a meta story. The film has a lot of drive and wit, dramatically, musically, and visually, like when a conductor talks about his secret love for Anne during a performance and keeps apologizing before the orchetstra crescendos, when a storm is a colossal rear projection, or when baby ANNETTE remains a marionette for so long that she gets exploited by Henry McHenry. Leos Carax and Sparks have made one of the most exciting films of the year and a future classic. After the film you may ask yourself why all of Carax‘ films aren‘t entirely sung or why that‘s not the case with all the films that feel like operas like DUNE, the Marvel movies, and so on. The Mael brothers may be over 70 by now, but there‘s still so much to do. ANNETTE is a gift and sets new standards. 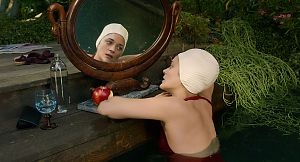 At its root a very current version of A STAR IS BORN, the collaboration between Leos Carax and the Mael brothers Ron and Russel of the band Sparks is filled to the brim with visual and musical ideas.