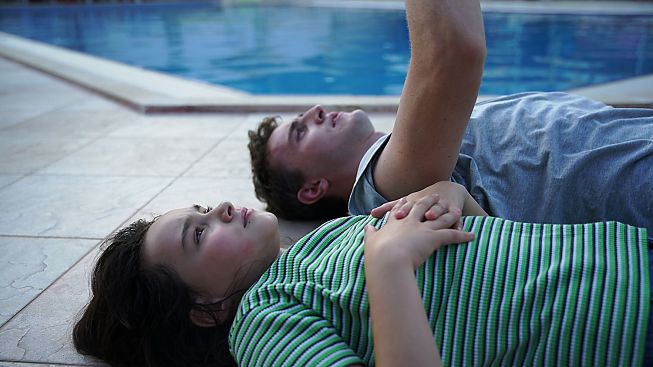 Sophie remembers her trip to Turkey with her father Calum 20 years ago by watching old video footage and traces chasms that she didn‘t perceive as a child.

Charlotte Wells‘ feature film debt is called AFTERSUN, like the cream that you put on to relieve the pain that occurs after sunbathing for too long. Sophie (Celia Rowlson-Hall) remembers her holiday in Turkey with her father Calum (Paul Mescal) twenty years ago while watching old video footage. She was 11, he turned 31 on the trip. The video footage turn into scenes like mental images in Sophie‘s memory. The budget holiday begins with waiting around at reception and getting a double bed instead of two single beds, but Calum and Sophie don‘t seem to mind. Money is tight, and Calum and Sophie, who have to pay for every drink themselves, are second-class guests in the all-inclusive resort. Sophie is about to hit puberty, he seems so young that two teens think he‘s Sophie‘s brother while they‘re out playing pool. She isn‘t interested in younger kids anymore, she secretly observes teenagers, hangs around with them later on too, but doesn‘t really belong there yet. There‘s a lot of creaming, and the touches between father and daughter are also on the threshold. Sometimes he carries her to bed in his arms like a child, sometimes she wants to cream her back herself. When she can‘t do it, his touches are very cautious.

The older Sophie seems to be searching for a darkness in her memories which she didn‘t perceive back then as she was too self-abosrbed. Calum is injured on his hand, it is never explained why. He buys a rug that he can‘t afford. Slowly it becomes clear that there‘s a threat looming along with the holiday ease, and that Sophie as an adult is searching for answers that she might never find. Charlotte Wells‘ film is a gentle, cheerful and sad film about loss and memory that appears so unpretentious that the risky staging of unusual and incidental perspectives can easily be overlooked. Stylistically, AFTERSUN is most reminiscent of Joanna Hogg (EXHIBITION), though she isn‘t interested in the working-class, or Jonathan Glazer (UNDER THE SKIN). Charlotte Wells‘ film is one of the best debuts in recent years. 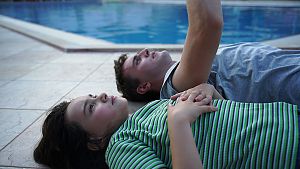 Sophie remembers her trip to Turkey with her father Calum 20 years ago by watching old video footage and traces chasms that she didn‘t perceive as a child.