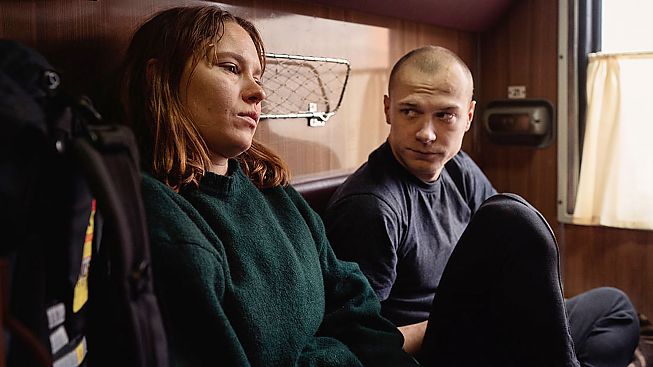 Finnish archeology student Laura and Russian miner Ljoha have to share a train compartment during the long journey from Moscow to Murmansk.

Mark Twain said: “There is no better way to find out whether you like people or hate them than to travel together.“ Finnish archeology student Laura (Seidi Haarla) is forced to share a train compartment with Russian miner Ljoha (Yuriy Borisov) while travelling to Murmansk. She was actually supposed to accompany professor Lirina (Dirana Drukarova), who Laura is having a relationship with in Moscow, but nothing came of it because Irina has work obligations. The young researcher travels alone in order to observe mysterious petroglyphs from the prehistoric era. Ljoha is looking for work. He is a tough guy who drinks a lot of vodka and hits every cliche that you would expect from a young Russian of his ilk: no manners and a lot of insults and sexist comments. He initially doesn‘t make any effort to befriend Laura. But the journey is long and the relationship between the involuntary couple warms with every kilometer. This kind of a premise isn‘t new, of course, and Richard Linklater‘s BEFORE SUNRISE from 1995 with Julie Delpy and Ethan Hawke raised the bar pretty high. But Juho Kuosmanen, who debuted his likeable feature film THE HAPPIEST DAY IN THE LIFE OF OLLI MÄKI five years ago about a Finnish boxer in the 60s, knows how to operate with calculated charm which easily turns COMPARTMENT NUMBER 6 (based on the novel "Hytti nro 6“ by Rosa Liksom) into an audience favorite. However, the deficits of the characters and plot are visible. The believability of the story as a whole and Ljoha‘s misogynist ways are hurdles you have to overcome if you don‘t want to end the journey prematurely.