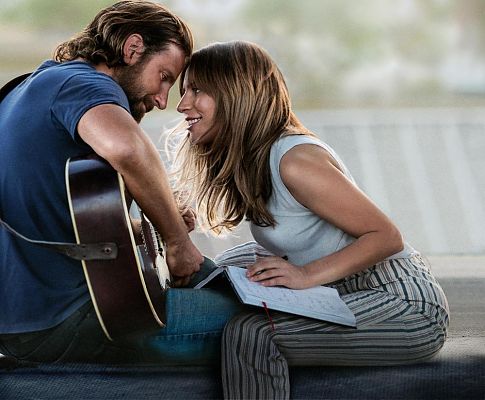 A Star Is Born

Lady Gaga as Barbra Streisand as Judy Garland plays a singer who becomes a star while the male star who discovers her succumbs to his alcohol and drug addiction. The fourth version of the material – not counting variations like ALL ABOUT EVE, ...

Bradley Cooper‘s A STAR IS BORN is already the fourth adaptation of the same material. The first one, directed by George Cukor with the title WHAT PRICE HOLLYWOOD, is about a confident waitress who becomes a film star and remains friends with the alcoholic director who made her famous even though it damages her career and her private life. The second version, now called A STAR IS BORN, was darker. A good girl from the countryside is discovered by an alcoholic film star and does well with the film honchos as the new “natural“ girl. She does have to change her name from Esther Blodgett to Vicky Lester though. Vicky/Esther becomes a star, the ex-star she is now married to loses more and more control over his life. The second version from 1954 with James Mason and Judy Garland, then 32 and released from her MGM contract due to her alcohol and pill addiction a few years before, was Garland‘s comeback project: 3 hours long, produced by her, but paid by Warner. A megalomaniac meta musical in which Garland process her own story in overly glamorous show numbers and made them legendary. In 1975 there was a version with Barbra Streisand (then 34) and Kris Kristofferson, which gave Streisand her second number 1 hit in the US. Streisand‘s Esther doesn‘t change her name, and her classic American musical style were staged as a direct expression of her soul.


And now there‘s also Lady Gaga in a film by Bradley Cooper, with Bradley Cooper, with songs written by Bradley Cooper. Unlike its predecessors, the new A STAR IS BORN is more interested in the male figure, rock singer Jackson Maine who declines due to alcohol, drugs, nd self-doubt. Cooper plays him as a sort of apologia for toxic masculinity. Maine is actually a nice guy with a difficult childhood and a complicated relationship to his older brother. His wild rocker persona hides a boy who hasn‘t quite grown up. Wenn he hurts Ally (Lady Gaga) because of his narcissism, an apology is enough. The central scene in all the films, when the male loser star embarrasses the female success story at the Oscar/Grammy awards, it‘s especially humilaiting here. So humiliating in fact that Jackson and Ally have to talk about it at least once, unlike the earlier films.

Since 1954 A STAR IS BORN is also about women‘s battle with body image. Judy Garland didn‘t fit with the star concept between the 30s and 50s, even though she was a money making machine for MGM, and her songs in the film discuss that. Streisand didn‘t fit the typical beauty ideal either. In her version it seems like there‘s no problem with that, yet no body part of Streisand is not commented on. Lady Gaga‘s appearance is a topic from the beginning, along with her relationship to the “truth“ and “honesty.“ During their first encounter at a drag club Jackson asks Ally whether he can take off her fake eyebrows, and from there on out the journey to the “real face“ of Ally/Lady Gaga begins.


At 32. Lady Gaga has a career as a hyper artificial pop star behind her, and shows her newly won “authenticity“ in the role of a great American entertainer. The mix of classic rock, grunge, and country that Jackson plays stands for honesty, the pop with which Lady Gaga wanted to revolutionize the music world represents a lie. The reconciliation in the end is an updated version of the show tune that Garland and Streisand made their money with: a contourless, faceless music without style. Because style, so goes A STAR IS BORN, is the beginning of all evil. You could see it as a betrayal of Gaga‘s own queer body politics as well.