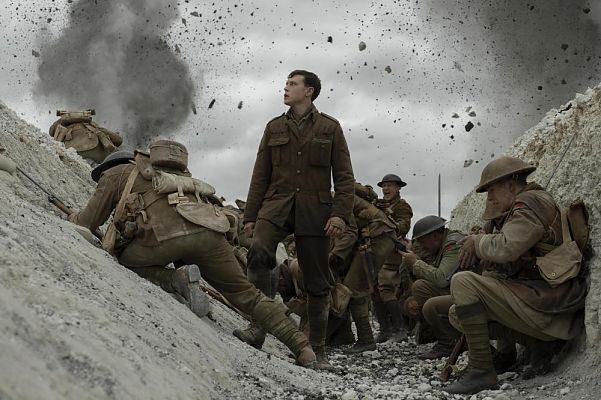 The Oscar for best cinematography should go to Roger Deakins again this year. There have been many “one take“ films since Alfred Hitchcock‘s ROPE, films that look like they have no cuts, like the Holocaust film SON OF SAUL (2015) by László Nemes, the Berlin thriller VICTORIA (2015) by Sebastian Schipper, or the acting drama BIRDMAN (2014) by Alejandro Iñárritu. But what director Sam Mendes and Roger Deakins do in 1917 hasn‘t been seen before. 1917 is simply breath-taking.

1917 tells the story of two British soldiers in World War 1 who have to survive no man‘s land in order to pass on the important message to the commando of a battalion about an attack that has been planned by the seemingly retreating Germans the next day. The Germans only appear to have retreated to a lower positioned post where the British bataillon is expecting reinforcement and a lot of artillery. This is a German military strategy that was also used in the rearguard action against the Soviet army in World War II. If the Brits attack, the bataillon will be lost. One of the two soldiers, Lance Corporal Blake (Dean-Charles Chaptman) has a brother among the 1,600 endangered Brits, that‘s why the high command chose him for this dangerous operation. The other one, Lance Corporal Schofield (George MacKay) just happens to be nearby when the mission is given.


1917 often feels like a horror film. The terrain the two men creep, run, and crawl in is a nightmare filled with rats, ruins, bomb craters, rotting corpses, and torn body parts. When something happens, it‘s as sudden as a jump scare in a horror film: an explosion, a shot, shocks without warning. The camera, that always remains with the soldiers, pulls you into the plot, directs the attention, adds details that pass you by in the image, sways in precarious safety, but usually refuses to give an overview or orientation.


1917 is a war film that wants to show the experiences of soldiers. There‘s definitely heroic behavior in the film, but it isn‘t rewarded nor does it arise from some ideals, and it definitely isn‘t due to nationalism. War films in Germany are always under the suspicion of glorifying violence, and it‘s often true. Sam Mendes‘ film is rather unsuspicious in this sense.

An overtly imperialist shitshow that can easily be blamed on rabid nationalism, filmmakers tend to cast a critical eye when portraying WW1 on film. From Lewis Milestone’s ALL QUIET ON THE WESTERN FRONT to Kubrick’s PATHS OF GLORY, movies about The Great War usually show it as the filthy, unjustifiable mess that it was. 1917, writer-director Sam Mendes’ (AMERICAN BEAUTY, SKYFALL) latest piece of Oscar bait, trivializes the whole thing by employing a cheap one-take/real-time motif that feels more like a Call of Duty session than an actual film.

Based on a story told to Mendes by his grandfather, 1917 follows two fictional soldiers (Dean-Charles Chapman and George McKay) tasked with hand-delivering a message to another battalion deep in the heart of enemy territory. Aerial Intelligence has learned that Germans have made a tactical withdrawal to a new Hindenburg Line, putting a planned British attack in major jeopardy. The 2nd Batallion of the Devonshire regiment is unaware of this, and with the telephone lines cut, the only way to get the message to them is by foot. And so begins our video game adventure, as our protagonists must outmaneuver all sorts of obstacles, including rats, bombs, and snipers.

While technically impressive, the gimmick wears out its welcome before the end of the first reel and one quickly starts to question its necessity, or what the film would be like without it (just as mediocre). The fact of the matter is that it’s not one take, which is fine, but hyping it as such only begs for extra scrutiny from the audience. The danger of these games is that curious viewers might invest more energy looking for the cuts, barely concealed in whip pans and brief moments the screen goes dark, instead of emotionally connecting to the paper-thin storyline.

The stakes in 1917 feel incredibly low throughout, mostly due to the limitations of the single-take style. A film about heading into hostile territory generally benefits from establishing shots of the terrain, so the audience gets a strong sense of geography, and just how close enemy fire may be. Instead, we’re mostly staring at the backs and profiles of our protagonists as they walk and walk and walk some more, and most of the episodic aggressions they encounter simply lack cinematic suspense. Despite the ticking clock and a video game aesthetic designed to feel as immersive as possible, it all ends up backfiring - you just never feel like you’re in there.

Politically, the film is a mess, and treads dangerously close to bootlicker territory. Mendes displays a frustrating reluctance to take a firm anti-war stance, or even address the evils of nationalism. Without a few half-assed attempts to “both sides” the whole charade with some throwaway lines from transient characters, 1917 might feel like blatant pro-military propaganda. Those merely entertained by the bombastic spectacle of war will probably find this all very thrilling – we get the plane crashes, the explosions, and the daring dashes across battlefields – all neatly choreographed to Thomas Newman’s overly instructive score. It comes as no surprise that the Academy, with its long history of supporting pro-imperialist works, chose to celebrate this over Terence Malick’s A HIDDEN LIFE, a film that staunchly rejects any notion of nationalism and refuses to fetishize bloodshed.